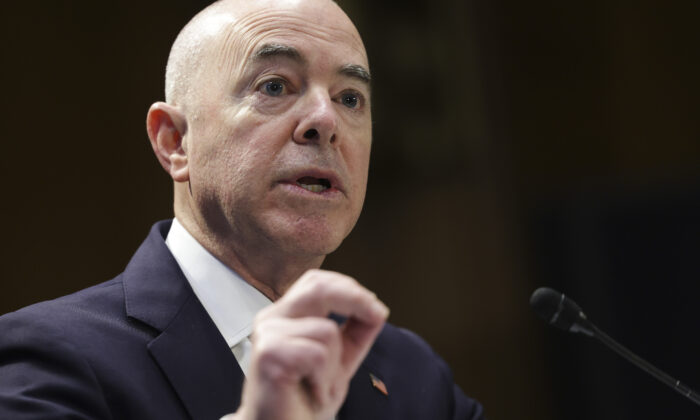 Suspected Terrorists Who Crossed Border Into United States May Have Been Released: Mayorkas

Some of the 42 illegal immigrants who were arrested by U.S. border agents and identified as suspected terrorists may have been released into the United States, Homeland Security Secretary Alejandryo Mayorkas said on May 4.

Mayorkas said officials in his agency know the “precise disposition” of each of the 42 suspected terrorists but declined to share that information in a public setting.

Instead, he offered to give a classified briefing to Sen. Rob Portman (R-Ohio), who had been questioning him.

“I look forward to getting that information,” Portman said.

The Department of Homeland Security (DHS) recently revealed that 42 people on the terror watchlist “attempted to enter the United States illegally” and were arrested by border agents between Jan. 20, 2021 and March 2022. The watchlist is maintained by the FBI, which says people on it are “reasonably suspected to be involved in terrorism (or related activities).”

In a hearing in late April, Mayorkas said he did not know whether any of the terrorists had been released into the United States, triggering criticism from Republicans.

In his opening statement, Portman, the ranking member of the Senate panel, described himself as shocked when he learned about the number of suspected terrorists apprehended.

Other Republicans during the hearing on Wednesday also touched on the issue.

Peters said Arab-Americans, including those in the state he represents, have “long endured lengthy and intrusive screening when traveling” and noted that Biden while campaigning in 2020 promised to order DHS to review how people are placed on the watchlist and the no-fly list to make sure that the processes “do not have an adverse impact on individuals or groups based on national origin, race, religion or ethnicity” and to “improve the process to remove names, when justified, from these lists.”

“Can you provide an update on the progress of your review and when you expect changes to be implemented?” Peters asked.

Mayorkas said the work is underway but that he could not provide any further information at this time.