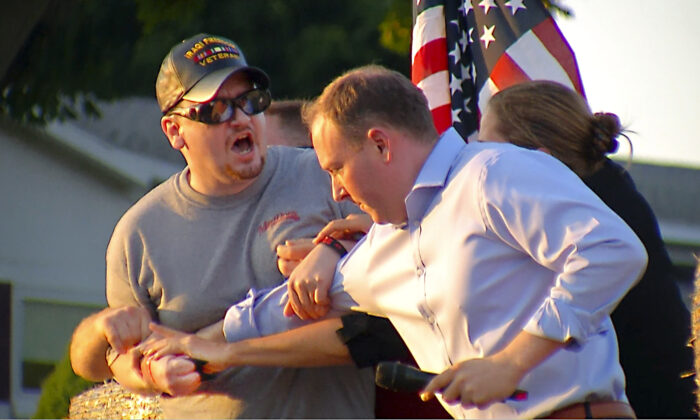 David Jakubonis (L) is subdued as he brandishes a sharp object during an attack on Rep. Lee Zeldin (R-N.Y.) as the Republican candidate for New York governor delivers a speech in Perinton, N.Y., on July 21, 2022, in this image taken from video. (WHEC-TV via AP)
Crime and Incidents

The suspected attacker of Rep. Lee Zeldin (R-N.Y.) has been arrested on a federal assault charge, the Justice Department announced.

David Jakubonis, 43, was arrested on July 23 and charged with assaulting a member of Congress with a dangerous weapon, following an investigation by federal authorities, U.S. Capitol Police, and state and local law enforcement. He was initially taken into custody on July 21 after he tried to stab the lawmaker, who is the Republican nominee for governor, during a campaign stop at a Veterans of Foreign Wars post in Fairport, New York, near Rochester. Zeldin wasn’t injured.

Jakubonis was arraigned on July 21 for second-degree attempted assault but was released on his own recognizance immediately after. The alleged assailant reportedly appeared in front of Magistrate Judge Marian Payson on July 23, according to a complaint filed in federal court.

Assistant U.S. Attorney Brett Harvey, who is handling the case, described the object that Jakubonis used to assault Zeldin as “a keychain with two sharp points.”

The attacker allegedly pointed the object toward Zeldin while saying “You are done” several times. The lawmaker was able to escape injury and stop the man by grabbing his wrist until others assisted in taking the attacker to the ground, Zeldin’s campaign said.

According to his former neighbor, Jakubonis experienced a “rapid decline” in his mental health following the death of his wife and medical discharge from the Army in 2012.

If convicted of the federal charge, he could face up to 10 years in prison. He is scheduled in court for a bail hearing on July 27.

Call for Repeal of Cashless Bail

Zeldin, the GOP nominee for governor, extended his gratitude to the federal agencies over the new charge.

“I’m thankful that federal authorities came in to do what New York State’s broken pro-criminal justice system could not—uphold the rule of law,” he said in a prepared statement, the New York Post reported.

Following the suspect’s initial release, the lawmaker criticized the state’s bail reform laws that Republicans and some law enforcement groups say have driven up crime.

“I believe that cashless bail in New York should be repealed and I’ve seen these stories of people get released on cashless bail and then they get re-arrested for a murder or double manslaughter,” Zeldin told Fox News.

“We have, in this particular case, somebody who, within hours, was put right back out on the streets right after he [came] on stage and he [tried] to stab me at a campaign event.”

Zeldin told the news outlet that security at his next campaign events will be beefed up.