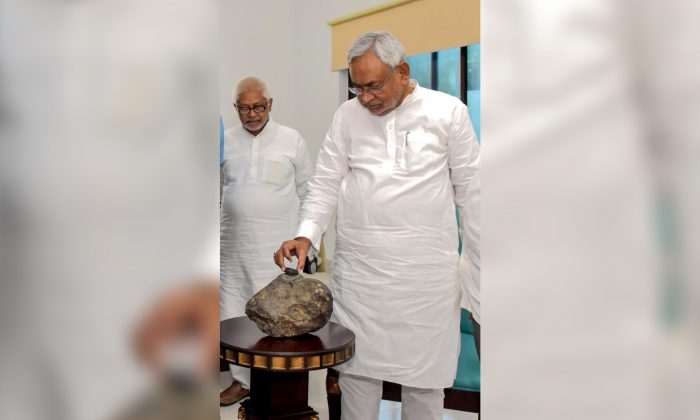 A suspected meteorite about the size of a football has crashed into a paddy field in a village in eastern India.

The rock, which landed in Mahadeva village in Bihar, weighed nearly 13 kilograms and was found to have magnetic properties, the state’s Chief Minister’s office said in a statement.

Images show villagers standing around a huge muddy crater believed to have been caused by the object.

The rock is currently on display at the Bihar Museum, but will be transferred to the Srikrishna Science Center, in Bihar, for analysis that will confirm if it is a meteorite, said Bihar’s Chief Minister Nitish Kumar.

Though they can look like a normal rock, meteorites are often heavier and have a burned exterior which can appear shiny—they also have magnetic content.

“Meteorites are of great interest to researchers as studying them helps us to understand the formation and evolution of the solar system,” Steven Ehlert at NASA’s Meteroid Office recently told CNN.

According to NASA, meteoroids are essentially “space rocks”—chunks of comets or asteroids orbiting the sun in space. They become meteors—or shooting stars—when they enter the Earth’s atmosphere and burn up. Meteorites make it through the atmosphere and land on the Earth’s surface.

On Wednesday, a fireball bright enough to rival the moon lit up the skies over southern Ontario and Quebec, with experts saying meteorite fragments from the fireball likely made it to the ground.

In 2013, a meteor blast shook Russia’s Urals region. Buildings lost windows and walls tumbled as the sonic wave from the explosion reverberated through the region, reportedly injuring 1,000 people.