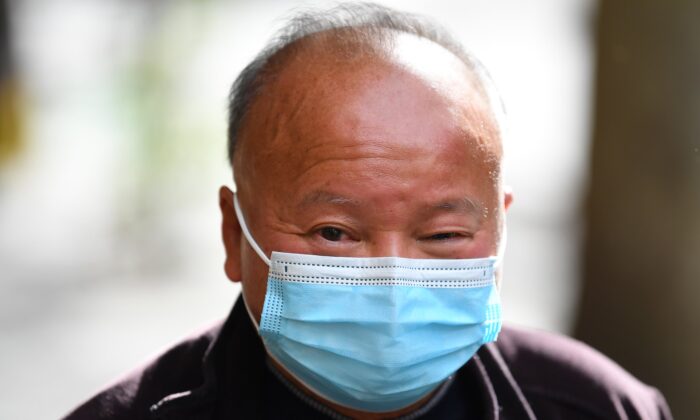 Duong Di Sanh departs from the Melbourne Magistrates' Court in Melbourne, Australia, on May 17, 2022. Former Liberal Party candidate Di Sanh Duong is charged with preparing an act of foreign interference within Australia following a year-long investigation by ASIO and the AFP. (AAP Image/James Ross)
Australia

A Melbourne-based Asian community leader who has been accused of planning foreign interference on behalf of the Chinese Communist Party (CCP) has been committed to stand trial.

The decision was made on July 28 by Melbourne magistrate Susan Wakeling who found enough circumstantial evidence for the case against Duong to go to trial. Wakeling also said that the evidence “taken at its highest” could support a guilty conviction.

Duong has formally pleaded not guilty to a charge of intentionally engaging in conduct with the intention of preparing for, or planning, foreign interference.

Under the 2018 National Security Legislation Amendment (Espionage and Foreign Interference) Act, the maximum penalty for “preparing for a foreign interference offence” is 10 years imprisonment.

According to several tapped recordings, which were presented to the Magistrates’ Court of Victoria on May 17, Duong spoke to a Liberal Party staffer in March 2020 when he offered to purchase COVID-19 testing kits from Hong Kong and donate them to Tudge.

Duong was a Liberal Party member at that time, but resigned in November 2020 following a joint investigation between the Australian Federal Police (AFP) and the Australian Security Intelligence Organisation (ASIO).

Further conversations that were presented to the court—which were authorised by the federal attorney general—found that Duong agreed to donate the money to the Royal Melbourne Hospital after being asked whether he would offer the same donation to then federal MPs, Greg Hunt and Gladys Liu.

Duong’s defence argued that the donation was merely a way for the Chinese Australian community to show they cared during the COVID-19 pandemic and that such action is further evidence that he was not acting on behalf of the CCP.

Duong’s bail was extended to August 25, when he will appear at the County Court for a directions hearing.

As part of his bail conditions, Duong is not allowed to leave Australia or contact a consulate, embassy, foreign intelligence agency or an elected official.

Duong was previously a leader of several community organisations in Melbourne, including the Oceania Federation of Chinese Organisations from Vietnam, Cambodia and Laos Inc., and the Museum of Chinese Australian History Melbourne.

Using his position, he mobilised other Melbourne-based Asian community leaders to support Beijing’s geopolitical claims to Taiwan and the East China Sea.

For example, in 2007, Duong, along with an alleged 30 community organisations, jointly condemned then-Taiwanese President Chen Shui-bian’s “Four Noes and One Without” pledge. The pledge affirmed Taiwan’s status as an independent nation from Beijing.

In 2011, Duong signed a joint declaration with several other community leaders for Japan to relinquish control of the Senkaku Islands to Beijing.

The letter claimed to represent the Chinese community in Australia and New Zealand, despite varying political views of the vast Mandarin-speaking population in both countries.

Over the past three years, ASIO has quietly expelled several Chinese businessmen and journalists due to alleged ties to the Ministry of State Security or Chinese foreign interference agencies, reported The Age. In April, property developer Zheng Jiefu was deported after it was alleged that he engaged in foreign interference on behalf of Beijing, including offering AU$20,000 (US$13842) to the Australian-based son of a human rights activist in China.

AAP and Daniel Y. Teng contributed to this report.