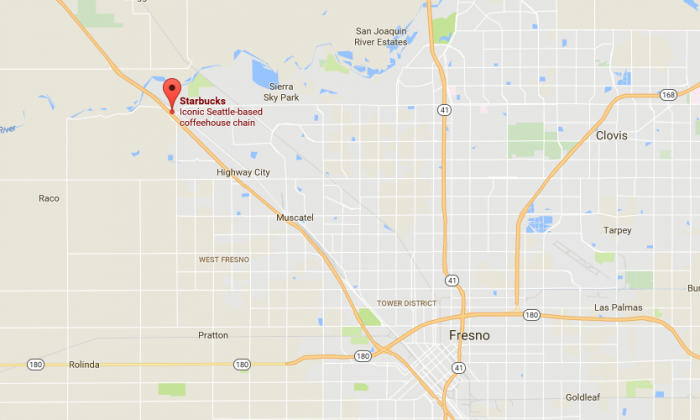 A location of the Starbucks that Ryan Flores allegedly attempted to rob on July 21, 2017. (Screenshot via Google Maps)
US

Suspect Wants to Sue Man Who Subdued Him During Attempted Robbery

When Ryan Flores, 30, tried to rob a Fresno Starbucks in July, Cregg Jerri, 58, forcefully stepped in to stop him. Flores now intends to sue Jerri for using too much force, Flores’s  mother said.

A security camera footage of the incident shows a man in a Transformers mask entering the Starbucks with a gun in hand. The man was identified by police as Flores. He then also pulls out a knife and hands a plastic bag to the barista demanding cash.

Meanwhile, Jerri picks up a metal chair, approaches Flores from behind, and smacks his back twice with the chair. A fight ensues. Jerri grabs Flores by the neck, while Flores flails the knife around. Jerri pushes him away from the registers. Flores trips over a chair and falls on the floor with Jerri standing over him delivering punches. At that moment it seems Flores is trying to stab Jerri. But Jerri gets hold of the knife and is seen repeatedly stabbing Flores.

Flores’s family doesn’t condone his alleged actions, said his mother Pamela Chimienti. But she said her son was a victim too.

“He has 17 total stab wounds, lacerations, and defensive wounds,” she said, YourCentralValley.com reported. “The guy, in my opinion, went from a Good Samaritan to a vigilante. Stabbing somebody that many times, it doesn’t take that many stab wounds to get somebody to succumb to you.”

The police are on Jerri’s side though.

“To say that Cregg Jerri is going to be sued for intervening in an armed robbery and being stabbed in the neck. That is ludicrous!” said Fresno Police Chief Jerry Dyer.

Jerri hasn’t been charged with a crime.