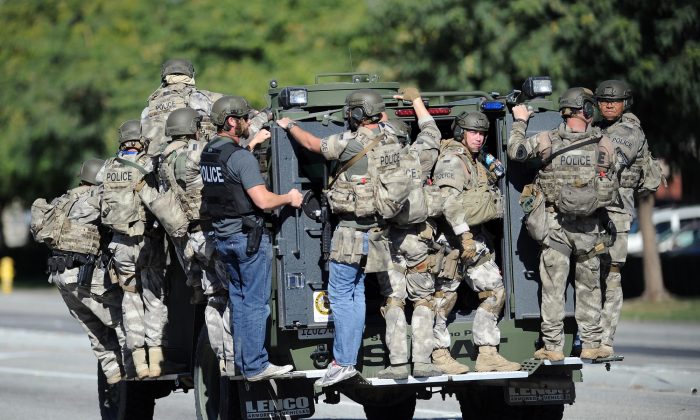 A SWAT vehicle carries police officers near the scene of a shooting in San Bernardino, Calif., on Wednesday, Dec. 2, 2015. Police responded to reports of an active shooter at a social services facility. (Micah Escamilla/Los Angeles News Group via AP)
US

One suspect killed by police on road after the chase n 2 still on loose.#SanBernadino, #sanbernardino pic.twitter.com/iJlBMhZWRn

One suspect killed by police on road after the chase n 2 still on loose.#SanBernadino, #sanbernardino pic.twitter.com/iJlBMhZWRn

As many as three gunmen believed to be wearing military-style gear opened fire Wednesday at a Southern California social services center, killing at least 14 people and wounding more than a dozen others, authorities said.

Hours later, police hunting for the attackers riddled a black SUV with gunfire several miles away, and one person lay motionless in the street with a gun nearby, and officers appeared to remove a second person from the vehicle.

It was not immediately unclear if the suspects were the gunmen, though police earlier said the attackers may have fled in a dark SUV.

Police were ‘pursuing a lead’ that led to SUV chase and shoot out. #SanBernardino https://t.co/zTSQPl7rbc pic.twitter.com/59ZQS51BvV

It was the nation’s deadliest mass shooting since the Newton, Connecticut, attack in December 2012 that left 26 children and adults dead.

Police shed no light on a motive for Thursday’s massacre, which came just five days after a gunman opened fire at Planned Parenthood in Colorado, killing three.

“They came prepared to do what they did, as if they were on a mission,” San Bernardino Police Chief Jarrod Burguan said, noting the attackers carried long guns — which can mean rifles or shotguns.

Witnesses said several people locked themselves in their offices, desperately waiting to be rescued by police, after gunfire erupted at the Inland Regional Center, which serves people with developmental disabilities.

The attack took place in a conference area where the San Bernardino County Department of Public Health was renting space to hold a banquet, said Marybeth Feild, president and CEO of the center. She said the building houses at least 25 employees as well as a library and conference center.

FBI agents and other law enforcement authorities converged on the center and searched room to room for the attacker or attackers, but it was feared that they had escaped.

Ten of the wounded were hospitalized in critical condition, and three were in serious condition,San Bernardino Fire Chief Tom Hannemann said. Police cautioned that the numbers of dead and wounded were early estimates that could change.