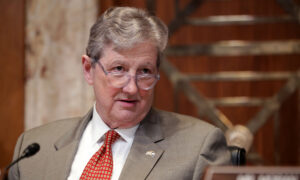 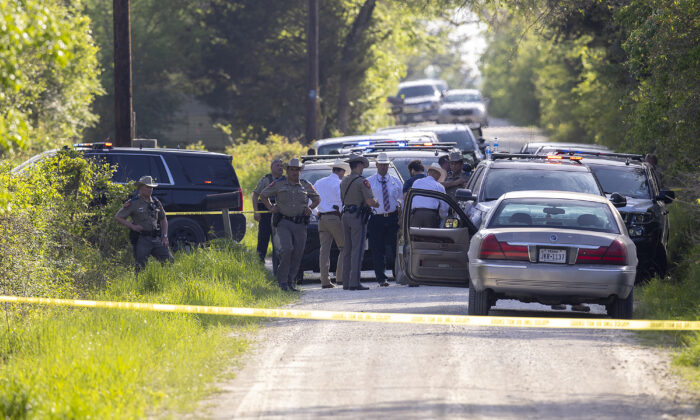 First responders work at the scene of the apprehension of a suspect at a residence in Bedias, Texas, on April 8, 2021, following a shooting at Kent Moore Cabinets in Bryan, Texas. (Michael Miller/College Station Eagle via AP)
Crime and Incidents

A gunman suspected in killing one person and wounding five others in shooting incidents in Bryan, Texas, on Thursday, has been arrested, authorities said.

Four of those injured are in critical condition, the Bryan Police Department said on Twitter.

The initial shooting incident took place at about 2:30 p.m. at a cabinet-making business in the central Texas city. Bryan Police Chief Eric Buske told reporters he believes the suspected gunman, who apparently acted alone, is an employee at the company Kent Moore Cabinets.

By the time law enforcement officers responded to reports of shooting in the industrial park, the suspect, who has not been identified, had fled.

The suspected gunman was later arrested in the town of Iola, about 30 miles (48 kilometers) away from the shooting site, Grimes County Sheriff Don Sowell said.

One of the injured victims has been identified as a trooper with the Texas Department of Public Safety (DPS). Texas DPS said on Twitter that the officer was “while pursuing an individual suspected of being involved in the shooting in Bryan” when he was shot.

He remains in serious but stable condition, Texas DPS said.

All five people injured in the shootings have been transported to local hospitals, according to officials.

The motive behind the shootings isn’t yet clear. The Epoch Times has reached out to the Bryan Police Department for comment.

The Bureau of Alcohol, Tobacco, Firearms, and Explosives sent agents and dogs to the shooting scene, said spokesman Deon Washington. Police asked people to stay away from the business during the investigation.

Bryan is about 100 miles (160 kilometers) northwest of Houston and sits on the doorstep of Texas A&M University. The city of more than 86,000 residents is a market, industrial, and medical center with an economy centered on the university.

According to the company’s website, Kent Moore Cabinets is headquartered in Bryan and employs more than 600 people statewide. The company makes custom cabinets and has design centers in nearly a dozen Texas cities.

Texas Gov. Greg Abbott and the First Lady of Texas offered prayers for the victims of the shootings and their families.

“Cecilia & I are praying for the victims & their families & for the injured officer,” Abbott said on Twitter.

“I have been working closely with the Texas Department of Public Safety and the Texas Rangers as they assist local law enforcement on a swift response to this criminal act. Their efforts led to the arrest of the shooting suspect,” he added in an official statement.