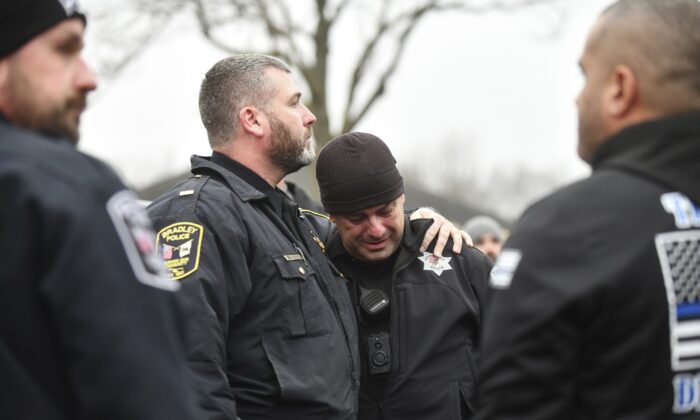 Suspect in Shooting of Illinois Officers Arrested in Indiana

CHICAGO—A man suspected in the shooting of one police officer and wounding of another at a northern Illinois hotel has been taken into custody, authorities said Friday.

Darius Sullivan, one of two people suspected in the shooting of the two Bradley police officers, was arrested Friday morning at a home in North Manchester, Indiana, Sgt. Glen Fifield of the Indiana State Police said at a news conference. Sullivan, 25, surrendered to a SWAT team that was assisting the U.S. Marshals with a search warrant for the property about 110 miles east of Bradley.

Sullivan’s arrest came a day after Illinois authorities warned that he should be considered armed and dangerous.

The Illinois State Police did not release any updates on the investigation Friday other than a written statement confirming that Sullivan had been arrested and would be taken back to Kankakee County, where the shooting occurred late Wednesday.

Fifield said he didn’t have any details on the investigation into the shooting. He did name three other men but wouldn’t discuss whether their arrests were connected to the officers’ shootings.

Two of the men were arrested after police said they ran from their car during a traffic stop in Fulton County, Indiana. The third was arrested at the home where Sullivan was taken into custody. Fifield said police found weapons and drugs in the car that the two men fled from and at the North Manchester home.

Authorities are still searching for 26-year-old Xandria A. Harris, of Bradley, who investigators believe was at the hotel when the shootings happened, the Illinois State Police said.

The two officers were speaking to people in a room at a Comfort Inn along a highway in Kankakee County when they were shot, according to the county sheriff’s office.

They were taken to nearby hospitals, where 49-year-old Sgt. Marlene Rittmanic died. The other officer—identified by the Illinois State Police as 27-year-old Tyler J. Bailey—underwent surgery and was listed in critical condition on Thursday, according to the Bradley Police Department.

Messages left with the department and Illinois State Police on Friday to update Bailey’s condition were not immediately returned.

The officers were at the hotel to investigate a report of dogs that were barking in an unattended vehicle in the parking lot, the sheriff’s office said. They found the room where the vehicle’s possible owner was staying and were shot while talking to the people in that room, it said.

Authorities arrested two other people Thursday on charges alleging they impeded the search for Sullivan and a woman also suspected in the shootings.

Nichele Newton-Carroll, 42, and Jelman Sullivan, 21, face charges of obstructing justice/leaving the state, the (Kankakee) Daily Journal reported. Neither had an attorney listed Friday in court or jail records.

Kankakee County State’s Attorney Jim Rowe identified Newton-Carroll as Sullivan’s mother. Rowe said he is not sure of the connection between Jelman Sullivan and Darius Sullivan.

The hotel shootings came hours after a sheriff’s deputy was fatally shot while responding to a motorist assist call on a highway near Mill Shoals, roughly 200 miles south of Bradley.

The Wayne County Sheriff’s Office said Deputy Sean Riley was found dead by a second officer who later arrived at the scene, and the deputy’s squad car was later found abandoned on I-64, police said. Authorities arrested a Kentucky man suspected in that attack and a carjacking in Missouri.