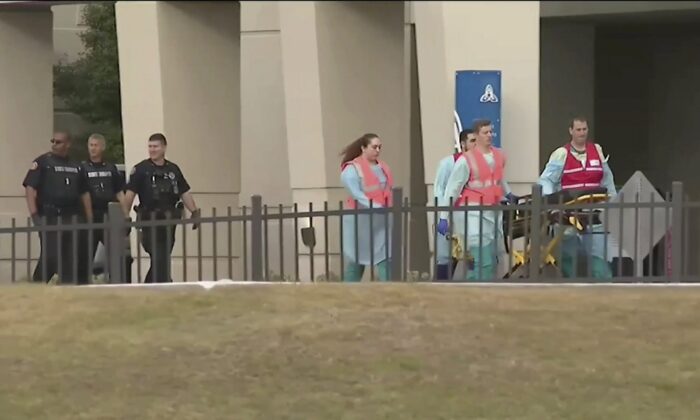 Emergency responders near the Naval Air Base Station in Pensacola, Fla., on Dec. 6, 2019. (WEAR-TV via AP)
US News

Suspect in Pensacola US Navy Base Shooting Was a Saudi National: Officials

The suspect who reportedly shot and killed three people before he was killed at a U.S. Navy base in Pensacola, Florida, is a Saudi national, officials said on Friday.

Investigators are now trying to determine to see if the shooting was terror-related, ABC News reported.

The shooter was in the United States for flight training, law enforcement sources told ABC and other news outlets. The Associated Press reported that he was an aviation student.

His identity and age have not been disclosed to media outlets.

“The base is still in lockdown as first responders secure the scene. Base security and the Naval Criminal Investigative Service are currently investigating. The names of the victims will not be released until the next of kin have been notified,” the U.S. Navy said in a statement.

Other than the four who died, several other people were wounded at Naval Air Station Pensacola. The suspect was shot and killed by sheriff’s deputies, it was reported.

“Walking through the crime scene was like being on the set of a movie,” Escambia County Sheriff David Morgan told ABC. He added, “The threat has been negated, our community is secured at this time.”

The base employs more than 16,000 military and 7,400 civilian personnel, says the Navy’s website.

President Donald Trump had been briefed and was monitoring the situation, a White House spokesman said.

Rep. Matt Gaetz (R-Fla.), whose district includes Pensacola, wrote on Twitter: “Please pray for our military service members, law enforcement, and other first responders as they work to address the situation.”

My staff and I are closely monitoring reports of a shooting at Naval Air Station Pensacola. The shooter is now dead.

Please pray for our military service members, law enforcement, and other first responders as they work to address the situation.

The lockdown in Pensacola comes just a few days after a sailor killed two civilian employees before turning a gun on himself at Pearl Harbor Naval Shipyard in Hawaii.