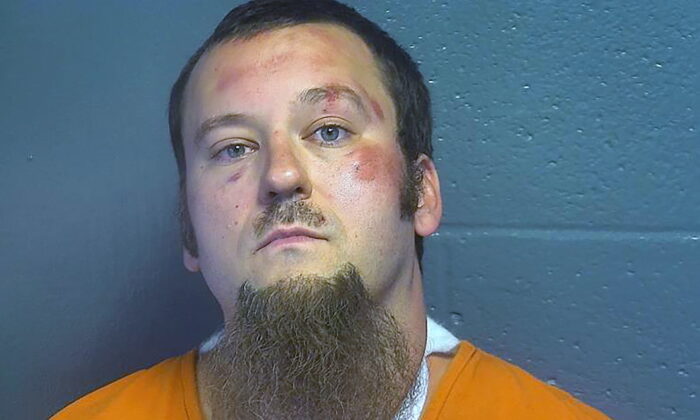 OKLAHOMA CITY—Court documents show the man suspected of fatally shooting an Oklahoma deputy sheriff and wounding another also fired at but missed a third deputy.

A probable cause affidavit alleges Benjamin Plank, 35, fatally shot Oklahoma County Deputy Bobby Swartz, wounded deputy Mark Johns and shot at the third deputy, whose name has not been released, as they tried to serve him with eviction papers Monday in Oklahoma City.

Based on the affidavit, a judge on Wednesday found probable cause of first-degree murder, shooting with intent to kill, assault with a deadly weapon and shooting from a vehicle to order that Plank be held without bond pending the filing of formal charges

Court and jail records do not list an attorney who could speak on his behalf.

The affidavit says Swartz, Johns and the third deputy went to the front door of the home to serve the papers, but Plank refused to exit the home.

Swartz and Johns then went to the rear of the house in an attempt to enter as the third deputy remained in front of the home.

“As the deputies approached the back door, they were met with gunfire,” killing Swartz.

Plank then entered a garage where he shot, but missed the third deputy, then went outside and exchanged gunfire with Johns, wounding Johns, the affidavit states.

Plank then fled in a pickup truck towing a boat and exchanged gunfire with pursuing law enforcement officers before stopping at an entrance to Tinker Air Force Base, where he was tackled, shot with a stun gun and arrested.

Oklahoma City Police Chief Wade Gourley, whose department is investigating the shooting, said Tuesday that a rifle, handguns, and ammunition were seized from Plank and that he has “100 percent confidence” Plank planned to kill “any law enforcement that came to his house,”

Gov. Kevin Stitt has ordered U.S. and state flags to fly at half-staff from Friday until sundown Sunday in honor of Swartz and Osage County Sheriff’s Capt. William Hargraves, who died in an automobile collision last Thursday.