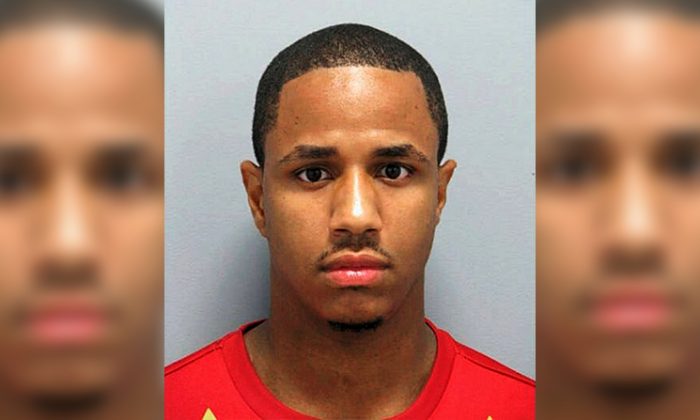 Danueal Drayton is wanted for a rape and a murder in New York and may be responsible for six other killings. (New York Police Department)
Crime and Incidents

Suspect in Murder of New York Nurse May Be Serial Killer

A man arrested for the torture and murder of a Queens, New York nurse and implicated in the rape of a Brooklyn woman, may be connected to six other killings.

Danueal Drayton, 27, of New Haven, Connecticut, was arrested in an apartment in California on July 24 in connection with the murder of Samantha Stewart, 29, a nurse from Jamaica, Queens.

When Drayton was arrested he had a woman with him, apparently about to be his next victim. He had already tied her up, raped, and beat her.

DNA then connected the Connecticut man to the June 17 rape of a 23-year-old Brooklyn woman, according to the New York Daily News.

Now authorities are saying Drayton might be responsible for six other killings.

“My body did this, not my mind,” Drayton told police, according to a police department source.

Drayton admitted to a pair of Connecticut killings, along with single slayings in the Bronx and Suffolk County. He also claimed responsibility for another murder in either Queens or Nassau County, and possibly a murder in California, according to the police source.

“I believe that there will be more victims,” New York City Police Department Chief of Detectives Dermot Shea said at a press conference.

When we captured Danuel Drayton in LA for the murder of Queens nurse Samantha Stewart, he had another victim held captive. He's off the streets but may have victimized others via online dating sites. Need help or have info? Call 800-577-TIPS/ sex crimes hotline 212-267-RAPE pic.twitter.com/iif7E9KuyA

Danueal Drayton was arrested on June 30 after an ex-girlfriend accused him of choking her.

CBS New York reported that Drayton had also been arrested five times in Connecticut, including one arrest for an alleged strangulation in 2011.

Drayton met Samantha Stewart online, and the couple dated briefly. He allegedly murdered Stewart in her own home on July 15.

Her father and brother found her body on July 17. She was naked, wrapped in a sheet, with her head in a pool of blood. Her teeth had been smashed out and her face was cut and bruised.

The medical examiner said she had been strangled to death.

Drayton is currently in custody in California on $1.25 million bail for charges of attempted murder, forcible rape, sexual penetration by foreign object and false imprisonment. If he is convicted in California, he could get life in prison.

He has yet to be charged for his crimes in New York.

It is not clear if New York will try to extradite him.

“Our priority was to get a very dangerous person off the street,” Chief of Detectives Shea told the media. “The pressing need was to get this guy off the street before someone else gets hurts.”