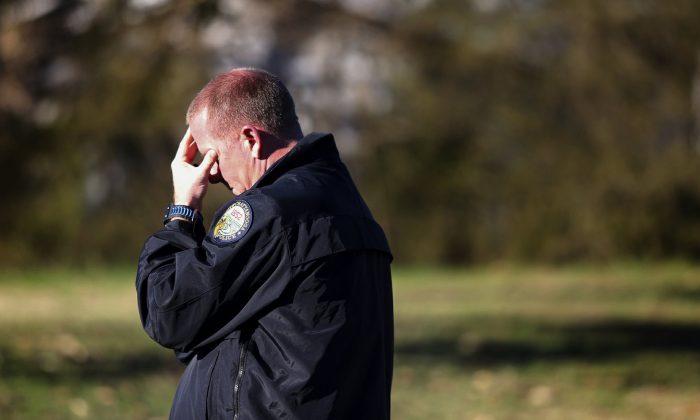 A Chattanooga Police Officer and others wait on a warrant as they stands on Port Drive in Hixson, a neighborhood of Chattanooga, Tenn., Sunday, Feb. 24, 2019. (Erin O. Smith/Chattanooga Times Free Press via AP)
Crime and Incidents

Suspect in Hit-and-Run Death of Tennessee Officer in Custody

CHATTANOOGA, Tenn.—The suspect in the hit-and-run death of a Tennessee officer was taken into custody on the morning of Feb. 25, police said.

Janet Elaine Hinds, 54, turned herself in hours after the Tennessee Bureau of Investigation put her on its Top Ten Most Wanted list, the Chattanooga Police Department announced on Twitter.

The agency said Hinds was wanted for vehicular homicide in the death of Nicholas Galinger. The 38-year-old officer was hit Saturday night while he was inspecting a manhole cover that had water flowing from it due to heavy rain.

News outlets report a police affidavit said Hinds was speeding, crossed a double-yellow line and hit a sign warning of an exposed manhole cover before hitting Galinger. She then drove away from the scene, police said.

Court records show she faces several other charges including reckless driving, leaving the scene of an accident and violation of a traffic control device.

In a court appearance Monday, prosecutors argued for a high bond but Hinds’ attorney, Ben McGowan, said that she has strong ties to the community, raised her family there and is the Soddy-Daisy postmaster. The judge set bond at $300,000.

Galinger graduated from the police academy last month and was struck while on a call with his field training officer.

Police recovered a Honda CR-V from Hinds’ residence on Sunday. The vehicle had front-end damage.

Chattanooga Police Chief David Roddy said the community “lost not just an officer. We lost a son, a father, a friend, and a protector.”

Staff photo by Erin O. Smith / Chattanooga Police Chief David Roddy updates the press with what is known about the…

Santa Rosa Police announced an arrest on Feb. 19, in a hit-and-run case involving a child.

A 7-year-old girl named Hazelann was running near her home across Louis Krohn Drive with her 9-year-old brother, Damiion Conzet when the crash took place on Saturday evening, according to ABC13.

Surveillance video from a neighbor’s home shows 29-year-old Dominick Weaver in a black Sedan hitting Hazelann, throwing her almost ten feet into the air before fleeing the scene.

The child received minor injuries in the crash and landed in the street after being hit, screamed, and then ran away with her brother and friend.


Conzet was scared by watching her sister get hit and thrown into the air. “I felt like I was about to pass out,” he told ABC.

Police received a call about the incidence at 5:14 p.m. and transported Hazelann to the hospital.

The police department in a release that it had declared a reward of $2,500 by the Sonoma County Alliance “Take Back Our Community Program” to anyone who provides information that leads to arrest and conviction of the suspect.

The public provided multiple tips to the SRPD Traffic Division and the investigations team arrested Weaver on Tuesday at about 3:30 p.m.

“One of the tips involved surveillance video of Weaver attempting to hide the vehicle after the collision occurred. Traffic Officers conducted several days of follow-up that involved review of Weaver’s social media posts, in which he was seen driving the vehicle involved in the collision, a 2004, black BMW 645ci,” said the police in an updated release.

Following the execution of a search warrant at Weaver’s residence on Broadmoor Street on Tuesday in Santa Rosa, the investigators found him hiding in an “upstairs bedroom.”

On being interviewed by the police, Weaver admitted to hitting the child and fleeing the scene. According to the press release, his BMW was recovered from his house.

Police said he was arrested for Felony Hit and Run and three outstanding warrants for his arrest.

“The Santa Rosa Police Department would like to thank the public for sending us tips involving this case that ultimately led to the suspect’s arrest,” the police said.