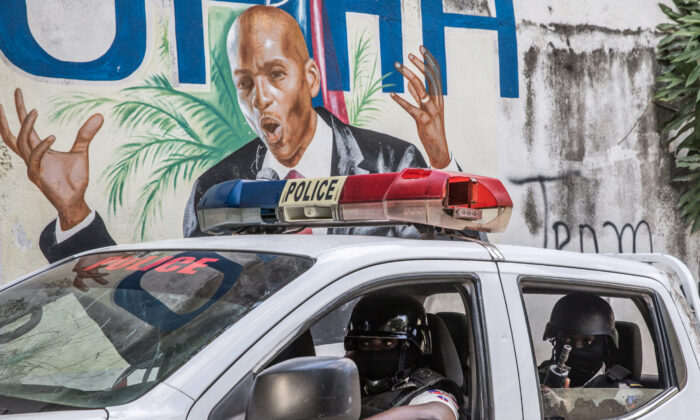 A police convoy drives past a wall painted with the president's image down the alley of the entrance to the residence of the president in Port-au-Prince, Haiti, on July 15, 2021. (Valerie Baeriswyl/AFP via Getty Images)
International

Suspect in Haiti Presidential Slaying to Be Extradited to US

SAN JUAN, Puerto Rico—A former Haitian senator who is one of the main suspects in the slaying of former President Jovenel Moïse agreed Thursday to be extradited to the United States to face charges, his attorney told The Associated Press.

It wasn’t immediately clear when John Joël Joseph, who was arrested in Jamaica in January, would be extradited from the Caribbean island, defense attorney Donahue Martin said. He added that Joseph’s wife and two sons have requested asylum in Jamaica and are still awaiting a response.

Martin declined to comment on the extradition agreement, and no further details were immediately available. Haitian government officials did not respond to requests for comment.

Two other suspects in the case—Haitian-Chilean businessman Rodolphe Jaar and Colombian soldier Mario Antonio Palacios—were recently extradited to the United States to face charges. Jaar was arrested in the Dominican Republic in January and Palacios was arrested in Jamaica in October.

Both are charged with conspiring to commit murder or kidnapping outside the United States and providing material support resulting in death, knowing or intending that such material support would be used to prepare for or carry out the conspiracy to kill or kidnap.

More than 40 suspects have been arrested in the presidential slaying, including 18 former Colombian soldiers. Colombian government officials have said the majority of the ex-soldiers were duped and did not know about the real mission.

It wasn’t immediately clear what charges Joseph might face. He is a Haitian politician and opponent of the Tet Kale party that Moïse belonged to.

A report from Haiti’s National Police that hasn’t been made public but was obtained by the AP quoted several sources saying Joseph had several links to the July 7 attack, with at least one person identifying him as one of the leaders.

The sources said Joseph paid cash for rental cars used by the attackers and met with other suspects ahead of the killing, which occurred before dawn at Moïse’s private residence. The report also stated that the former senator introduced other suspects to Joseph Badio, the alleged leader of the plot who previously worked for Haiti’s Ministry of Justice and the government’s anti-corruption unit until he was fired.

In addition, the report stated that James Solages, a Haitian-American arrested in the case, had a WhatsApp conversation with Joseph regarding preparations for the mission. It also said Solage told authorities that Joseph, Badio and Jaar were among those appointed leaders of the operation.

Thursday’s deal comes as the majority of suspects in the case have languished for months in Haiti’s main penitentiary in the capital of Port-au-Prince. The Colombian soldiers have accused Haitian authorities of torture, while the Colombian government has said the country’s consul in Haiti was threatened after trying to provide humanitarian assistance.

In September, the imprisoned ex-soldiers said there were no bathrooms or potable water, which they either had to buy or wait for a good Samaritan to bring them some. They noted they were fed only once a day and that some had lost up to 44 pounds (20 kilograms).

The suspects have remained in prison as the Haitian government struggles to move the case forward. The first judge appointed to the case stepped down after citing personal reasons, a move that came after one of his assistants died under unclear circumstances. A second judge who was appointed stepped down amid corruption accusations that he denied. He also had asked for more time to investigate the case but was denied. A third judge has said he is still considering whether to take the case.

Jails and prisons in Haiti hold more than three times their capacity, with the United Nations releasing a report last year noting that the condition of detention observed by officials represented a “situation of torture or cruel, inhuman or degrading treatment.” It also noted that food and water were scarce.