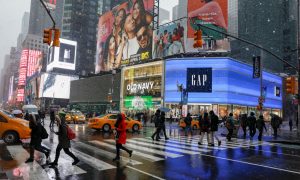 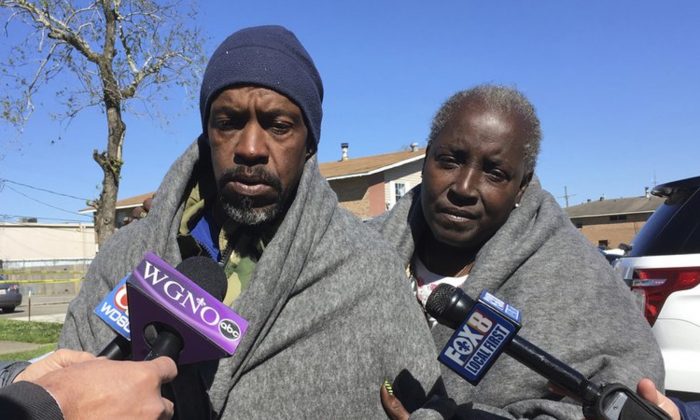 Emmett Rhodes, left, and neighbor Willie Tyson stand outside a house where authorities found a woman and two children killed and another woman and child critically injured in Terrytown, La., on March 6, 2019. (Kevin McGill/AP Photo)
Crime and Incidents

Suspect in Custody in Deaths of Woman, 2 Children in Terrytown

TERRYTOWN, La.—A man is in custody for the bludgeoning deaths of a woman and two children outside of New Orleans on March 7. A teenager and another child were also critically injured in the attack.

Deputies found the victims inside a home in Terrytown just after 7 a.m., Jefferson Parish Sheriff’s Office spokesman Jason Rivarde said. The injured were taken to a hospital.

At a news conference on Wednesday, Sheriff Joe Lopinto said the suspect confessed to the crimes and would likely face at least several counts of first-degree murder. Lopinto would not release any details about the suspect’s relationship to the victims. He also refused to release the suspect’s name or those of the victims but did say the deceased children ranged in age from 8 to 14.

Autopsies will be conducted Thursday to determine an official cause of death, he said but added it appeared to be blunt force trauma.

“The suspect’s confession just happened. I haven’t reviewed any type of statement he’s given. We’ve also just finished processing the scene,” he said.

A man who said he was the father of one of the victims stood outside the house late Wednesday morning wrapped in a gray blanket to ward off the cold.

Emmett Rhodes said the victims also included his daughter’s three children, ranging in age from about 8 to 14.

“I’m hurting right now,” Rhodes said, adding that he had no idea why anyone would want to harm his daughter and her children.

Updated story on triple killing in Terrytown. Much still unknown. No IDs/ages of victims, but JPSO says reports of 3 kids dead were erroneous. No motive suspects or arrests as of yet. https://t.co/mPFU4nDbFQ via @theadvocateno

Police photographed and later towed a car parked across from the crime scene, but would not say why.

Friends and neighbors gathered outside the scene for hours as investigators did their work. Those gathered around told Fox8 that violence is not new in the area but what happened is very gruesome.

“Right now it’s just heartbreaking in this neighborhood right now,” Cynthia Bingham, a resident told Fox8. “You see the kids mostly, you don’t see the mom that much. Or you’d see the grandfather outside.”

“Of course it’s shocking, and when children are victims, it always makes it worse.”

The Latest: Suspect in custody in deaths of woman, 2 kids https://t.co/cPgpyVf5Qe pic.twitter.com/dUlnPPuzL4

A staggering drop in gun violence has been recorded in New Orleans since 1970s, reported The Advocate.

Homicides fell to the lowest level and shootings were down by 30 percent in 2018.

2018 violent crime in New Orleans plummets to levels not seen since the 1970s https://t.co/RVMPMTFewJ via @theadvocateno

The city has a growing network of street-facing surveillance cameras run by the city’s Homeland Security Office, which monitors them day and night. The New Orleans Police Department has come to use these in various criminal investigations.

These cameras have produced high definition images of the criminal suspects that helps police to apprehend them.