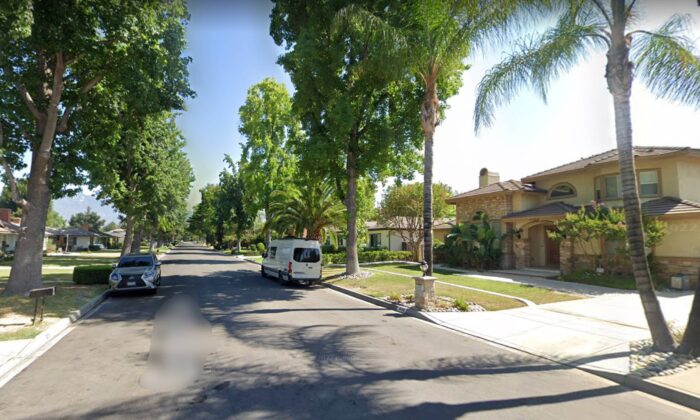 The neighborhood where a shooting suspect is reportedly barricaded in a house on Aug. 11, 2022, at the 2500 block of Greenfield Ave. in Arcadia, Calif., in July 2022. (Google Maps/Screenshot via The Epoch Times)
Southern California

ARCADIA, Calif.—A man accused of shooting an Arcadia police officer in the face and wounding two other people—including his 73-year-old mother—and sparking a roughly five-hour standoff, was in custody Aug. 11, and the officer was being treated at a hospital and expected to recover.

Nurhan Venk, 47, who suffered an apparently accidental self-inflicted gunshot wound to his leg during the incident, was booked on suspicion of attempted murder, according to Lt. Derrick Alfred of the Los Angeles County Sheriff’s Department.

Venk also allegedly shot his 73-year-old mother, Ankine Venk, in the chest, Alfred said. An 83-year-old man who lives across the street, Zoo Yang, was wounded in the eye by a stray bullet that passed through a window frame.

Venk was arrested around 10:45 p.m. Aug. 10 following the standoff in the 2500 block of Greenfield Avenue, authorities said.

The wounded police officer, who was not identified, was reported to be in stable condition, recovering from a gunshot wound to the side of the face. He and the other wounded victims are all expected to survive, Alfred said.

Arcadia police responded around 5:40 p.m. Wednesday to a report of a family disturbance.

According to Alfred, Venk’s mother owns the home and had “kicked out” her son Nurhan, who used to live there. On Wednesday, the suspect returned to the residence, prompting a family dispute that led to a police response.

The sheriff’s department reported officers at the scene were speaking to a witness who told them Venk arrived at the home “armed with handguns” and was threatening his mother inside when they overheard at least two gunshots coming from the home.

As officers approached the home, the suspect opened fire, striking one officer in the face, Arcadia police Lt. Brett Bourgeous said, noting that the officers did not return fire. Another officer was treated for an apparent ankle injury.

Yang’s son told reporters the victim was watching his 4-month-old grandson when the stray bullet pierced a window of his home, but the infant was not injured. He said his mother also suffered minor shrapnel injuries.

As officers backed away from the home after coming under fire, Venk’s mother and her 12-year-old grandson ran from the home to safety, according to the sheriff’s department. Venk’s mother was then taken to a hospital with a non-life-threatening gunshot wound to the chest, while the boy was not reported to be injured.

Venk barricaded inside the home following the shooting, and a sheriff’s Special Enforcement Bureau team was summoned to the scene.

Nearby residents were either evacuated or told to shelter in place as the standoff continued.

At about 10:45 p.m., investigators fired a flash-bang device at the home, prompting the suspect to limp out with his hands raised, surrendering to officers and deputies. He was taken to a hospital for treatment of the apparently self-inflicted leg wound.

The identity of the injured officer was not immediately released. Bourgeous said the officer has been with the department for about six months, but has about three years of overall law enforcement experience, having previously served with the sheriff’s department.

Neighbors told reporters at the scene that the family involved in Wednesday’s violence has been repeatedly involved in fights and arguments.

The shooting marked the second time this week a police officer came under fire. On Monday, off-duty Monterey Park Police Department Officer Gardiel Solorio was fatally shot during an apparent robbery attempt outside a gym in Downey. Solorio was off duty at the time, and there’s no indication the shooting was related to his job as a police officer.

Two suspects—a man and a teen—were arrested in connection with Solorio’s killing. The man was charged Wednesday with murder and other counts.