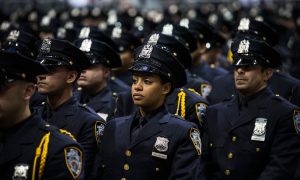 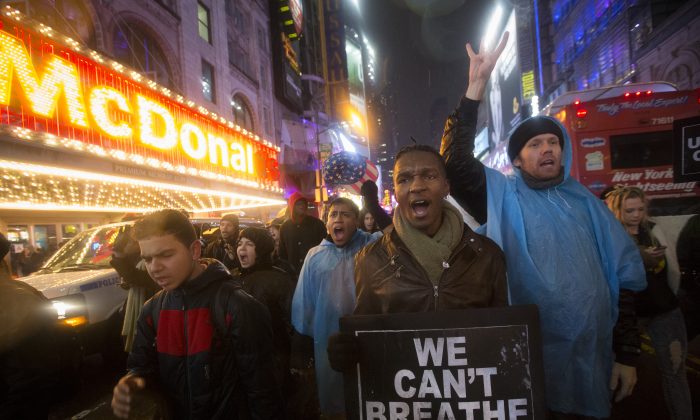 Protesters march against a grand jury's decision not to indict the police officer involved in the death of Eric Garner, Friday, Dec. 5, 2014, in New York. (AP Photo/John Minchillo)
New York

NEW YORK—Early Thursday morning, one of the suspects in the case of assaulting two police officers last Saturday during mass protests turned himself in, police confirmed.

The man walked into police custody, accompanied by his attorney, and is being held for questioning. Police are still investigating and have not filed any charges yet.

Read the update: Robert Murray Turns Himself Over to Police

The man held in custody is one of seven suspects—three other males and three females—that police are looking for. The other six still remain at large, but police say they have strong leads.

Protests against police brutality are in solidarity with Eric Garner, a black man who died after being placed in a chokehold by a white police officer, Daniel Pantaleo, in Staten Island. The borough’s grand jury decided not to indict Pantaleo, which triggered mass protests that have gone on for weeks.

Although protests have largely been peaceful, the exception came on Saturday during a march with tens of thousands of protesters on the Brooklyn Bridge, when Baruch College City University of New York professor Eric Linsker was ordered to put down a garbage can by an officer. Linsker then threw a punch at the latter.

Seven other men and women then kicked and punched two lieutenants, Patrick Sullivan and Philip Chan. They broke Chan’s nose and gave both men bruises.

New York City Police Commissioner Bill Bratton said at a Monday evening press conference, “We do not take attacks on our police lightly.” Photos of the seven were released on Tuesday and a $12,000 reward was offered for any evidence or information. The offer still stands, according to police.