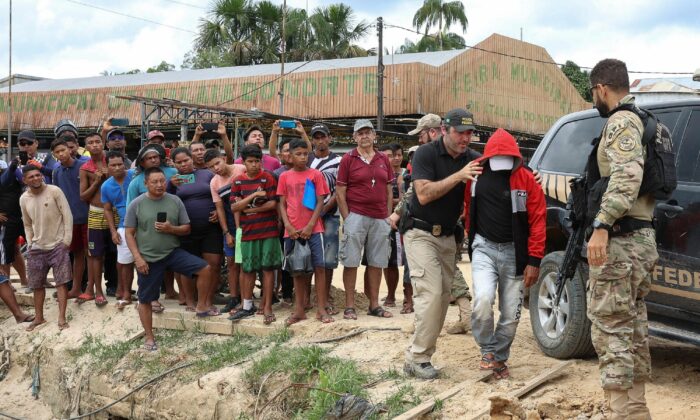 Federal Police officers escort a man accused to be involved in the missing of British journalist Dom Phillips and indigenous expert Bruno Pereira, who went missing while reporting in a remote and lawless part of the Amazon rainforest, near the border with Peru, in Atalaia do Norte, Amazonas state, Brazil, on June 15, 2022. (Bruno Kelly/Reuters)
Americas

The main suspect in the investigation into missing British journalist Dom Phillips and indigenous expert Bruno Pereira has confessed to killing the men, a Brazilian police investigator said on June 15.

The suspect, 41-year-old fisherman Amarildo da Costa de Oliveira, known locally as “Pelado,” led police to the remains, which have yet to be formally identified.

Phillips and Pereira were last seen in a remote area of the Amazon rainforest on June 5, when the pair were on a research trip for a book Phillips had been working on.

In a June 15 press conference, Brazilian police said Amarildo, who had clashed with Pereira over his efforts to combat illegal fishing in indigenous territory, confessed that he had killed Phillips and Pereira with a firearm, buried their bodies, and sunk their boat.

Amarildo led police to a remote burial site where the remains were unearthed, and the police are expected to recover the boat on June 16.

He also said the remains would be sent to the National Institute of Criminalistics in Brasilia, Brazil, on June 16 for identification.

As for the boat, Fontes said, “They put sacks of dirt on her to sink in. They took the engine out; they sunk the engine.”

The news marks a grim conclusion to a case that has raised global alarm, hanging over Brazilian President Jair Bolsonaro at a regional summit and stirring concern in the UK Parliament.

Phillips, a freelance reporter who has written for The Guardian and The Washington Post, was doing research for a book on the trip with Pereira, a former head of isolated and recently contacted tribes at federal indigenous affairs agency Funai.

They were in a remote jungle area near the border with Colombia and Peru called the Javari Valley, which is home to the world’s largest number of uncontacted indigenous people. The region has been invaded by illegal fishermen, hunters, loggers, and miners, and police call it a key route for drug trafficking.

The Costa brothers were seen meeting on the Itacoai River just moments after Phillips and Pereira passed by on June 5, headed toward the riverside town of Atalaia do Norte, a witness told federal police in a report reviewed by Reuters.

The police report states that witnesses heard Pereira say he had received threats from Amarildo.

Bolsonaro suggested on June 15 that Phillips had made enemies by writing about environmental issues.