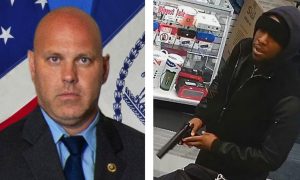 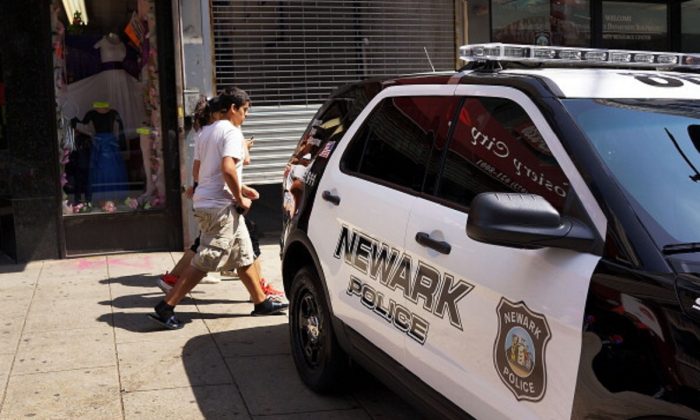 People walk by a police car in downtown in Newark, New Jersey. on May 13, 2014. (Spencer Platt/Getty Images)
US News

IRVINGTON, N.J.—A suspect has been charged with robbery and kidnapping a day after a girl walking her dog heard a man screaming from the trunk of a car and helped rescue him.

Kayla Rose, 17, was walking her dog before going to school on March 7 when she heard “knocking and scratching” coming from the trunk of a black Nissan parked on her block.

“I moved closer and said, ‘Hello?’” Rose told the New York Post. She heard a man reply, “Hello? I need some help!”

Rose sprinted to the home of her neighbor and they called the police.

The neighbor, Joe Bollaro, 70, tried getting the man out of the car with a crowbar but was forced to wait until the police arrived.

“I asked if he could breathe,” said Bollaro. “He said he could. I told him, ‘Hang on, the police and fire department are on the way.”

Firefighters jimmied open the car door and folded down the rear car seat, sliding the man—who was bound with duct tape—out.

“His face was all smashed up,” Bollaro said. “He said they hit him. They had him tied up, his hands. The firemen had to cut him loose.”

Marie Banks and her daughter Kayla Rose. 17 yr old was walking her dog on Lindsley Ave when she found a man locked in a trunk. The man tells police he was carjacked, forced at gun point to get cash at ATMs, then tied up and put in trunk. He was cold, but ok. #1010wins pic.twitter.com/NXlFjAWd4z

A man is left tied up in a trunk and screams for help… a teenager walking her dog comes to the rescue. Meet the girl whose quick thinking made her a hero, tonight on #ChasingNews with @BillSpadea. pic.twitter.com/FQbCRLcOgc

Police say two armed men kidnapped the victim around 7:30 p.m. Wednesday in Hillside, near Newark, and forced him to withdraw cash from ATMs.

The girl came upon the victim after hearing his screams from a trunk on Thursday morning.

Berrouet is charged with carjacking, kidnapping, robbery and weapons offenses. He was being held at Union County Jail pending an initial court appearance.

Attorney information could not be found for Berrouet.