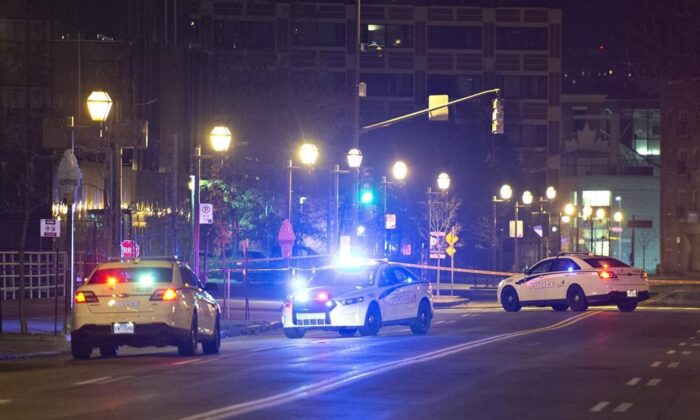 QUEBEC—Police in Quebec City say two people are dead and five others have been injured in a stabbing rampage in the provincial capital.

They say a man in his mid−20s has been arrested in connection with the Halloween night attacks and that he was taken to a local hospital for evaluation, but no information was released about his condition.

Police said earlier that the five injured victims were in hospital but their lives did not appear to be in danger. They did not offer any more specific information about their conditions.

Spokesman Etienne Doyon also declined to offer any information about the two people who were killed, saying only that “Our thoughts are with the family of the people who died today.”

Police didn’t speculate on a possible reason for the attack, however, they tweeted overnight that they had no information indicating the suspect’s motives were anything other than personal.

Doyon said he could not immediately confirm if the suspect was known to police, or whether more than one person may have been involved in the attack.

“Nothing is impossible,” he said. “But for now, we’re happy to have arrested a suspect and the investigation is ongoing.”

Police had earlier warned residents to remain indoors as they hunted for a man dressed in medieval clothing and armed with a sword who they said had left “multiple victims.”

Doyon said police were first notified of the stabbings near the national assembly in the old part of the city shortly before 10:30 p.m. Saturday.

Carlos Godoy, who lives in the area, said police K−9 units had searched his backyard as they hunted for the suspect.

“It was really erratic, very abnormal for the neighbourhood,” he said.

“It’s a full moon, it’s October 31st. It’s Halloween, and it’s a lockdown weekend. No one should be out on the streets,” Godoy said. “And I’m in an extremely quiet neighbourhood because there are no tourists nowadays.”

Police had asked area residents to remain indoors as they continued their investigation.