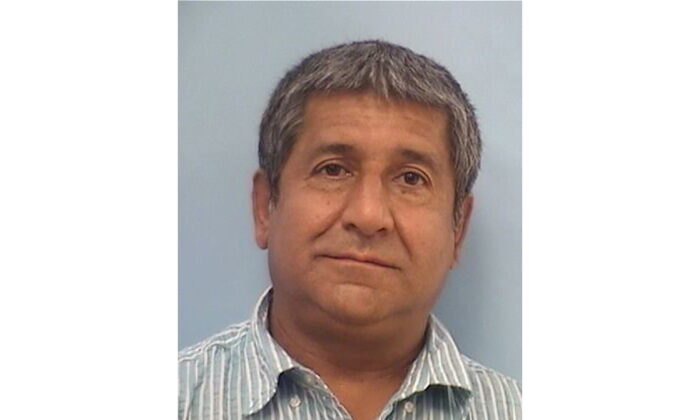 This photo released Aug. 9, 2022, by the Albuquerque Police Department shows Muhammad Syed, 51, who was taken into custody Aug. 8, 2022, in connection with the killings of four Muslim men in Albuquerque, New Mexico, over the last nine months. He faces charges in two of the deaths and is the primary suspect in the other two murders. (Albuquerque Police Department via AP)
Crime and Incidents

Suspect Arrested in Killings of 2 Men in New Mexico, All Are Part of Local Muslim Community

Officers from the Albuquerque Police Department (APD) in New Mexico and the FBI have arrested Muhammad Syed, 51, in connection with the murders of two other Muslim men in the city.

On Aug. 7, the APD released photos of a Volkswagen vehicle believed to have ties with the murders of four Muslim men over the past year that has put the Islamic community in the region on alert.

“As detectives prepared to search Syed’s home in Southeast Albuquerque on Monday, Syed drove from the residence in the Volkswagon [sic] Jetta that detectives believe was used in at least one of the murders. Detectives detained Syed and searched his home and the vehicle,” an Aug. 9 news release from the department said.

The detectives found evidence that further linked Syed to the murders. Syed is thought to have known the victims “to some extent,” and the shootings may have been the result of interpersonal conflict, the department stated.

After searching Syed’s home, officers found the gun used in the two shootings.

According to police Chief Harold Medina, Syed is the primary suspect in the other two killings, and detectives will continue working with the district attorney’s office to determine whether they can bring charges against Syed for the murders of Mohammad Zaher Ahmadi, who was killed on Nov. 7, 2021, and Naeem Hussain, who was killed on Aug. 5, 2022.

Before Syed was arrested and the identity of the alleged killer was unknown, the deaths of the four Muslim men resulted in leftwing media and politicians characterizing the murders as racial violence. Michelle Melendez, Albuquerque’s director of equity and inclusion, said at a press conference that the murders appeared to be targeting people “because of their race and religion.”

And an Aug. 7 Twitter post from the account of President Joe Biden said that the president was “angered and saddened by the horrific killings of four Muslim men in Albuquerque. While we await a full investigation, my prayers are with the victims’ families, and my Administration stands strongly with the Muslim community. These hateful attacks have no place in America.”

But the arrest of Syed disrupts the narrative about the murders having anything to do with racial issues, as Syed himself is Muslim and police said the killings likely stemmed from a personal conflict.

Investigators zeroed in on Syed after receiving a tip from Albuquerque’s Muslim community.

When reporters asked whether Syed, a Sunni Muslim from Afghanistan, was angry at the fact that his daughter had married a Shiite Muslim, Deputy Police Cmdr. Kyle Hartsock did not give a clear answer.

“Motives are still being explored fully to understand what they are,” he said, according to The Associated Press.

Syed has lived in the United States for roughly five years.