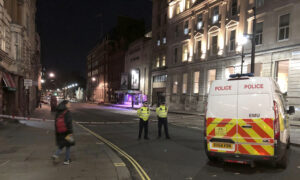 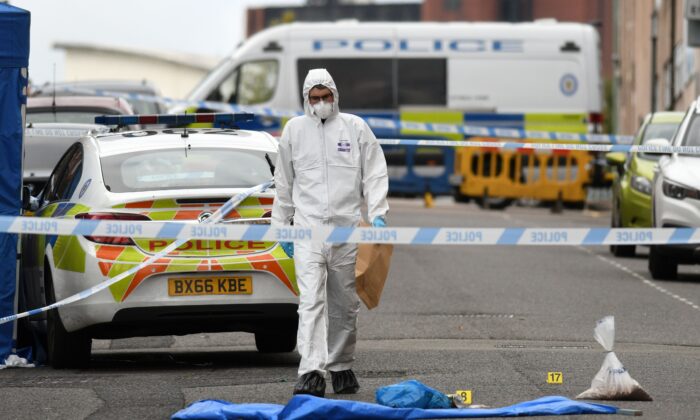 A police forensics officer gathers evidence near to evidence markers inside a cordon on Irving Street, following a major stabbing incident in the centre of Birmingham in central England on Sept. 6, 2020. (Oli Scarff/AFP via Getty Images)
UK

Suspect Arrested in Birmingham Over Multiple Stabbings, One Man Dead

British police on Monday said they had arrested a man on suspicion of murder after a series of stabbings in the early hours of Sunday morning in the city of Birmingham left one man dead and seven other people injured, two of them critically.

Detectives said the stabbings, which took place in four locations over two hours, were linked to each other but appeared to be random and not thought to be gang-related or connected to terrorism.

The  27-year-old suspect was detained in the Selly Oak area of Birmingham in the West Midlands area at 4 a.m. on Monday, West Midlands police said in a statement.

UPDATE… Thank you for your help and support. 👏 https://t.co/npAT6c36in

“Officers worked through yesterday and into the early hours of this morning in a bid to trace the man we believe responsible for these terrible crimes,” said Birmingham Police Commander, Chief Superintendent Steve Graham.

A 23-year-old man died in the attacks. The two critically injured stabbing victims are a man and a woman aged 19 and 32.

The five people who sustained non-critical injuries in the knife attacks are aged between 23 and 33.

The police have CCTV footage of the suspect, which they released to the public.

“We issued CCTV footage of the suspect and had a strong response from the public. I’d like to thank everyone who shared our appeal and who provided information to the investigation,” Graham said.

“One line of enquiry ultimately led us to an address in the Selly Oak area this morning where a man was arrested.

“Clearly this is a crucial development, but our investigation continues,” he said.

Graham added, however, that police still need eyewitnesses who have not yet contacted them to come forward.

He also appealed to anyone who had photos or video footage of the attacks or the attacker.

“We have a hotline number and a dedicated web page where you can submit information, photos and videos,” Graham said.

The first stabbing took place in Constitution Hill. More stabbings then occurred in Livery Street and Irving Street. The last of the stabbings happened in Hurst Street, the police said.