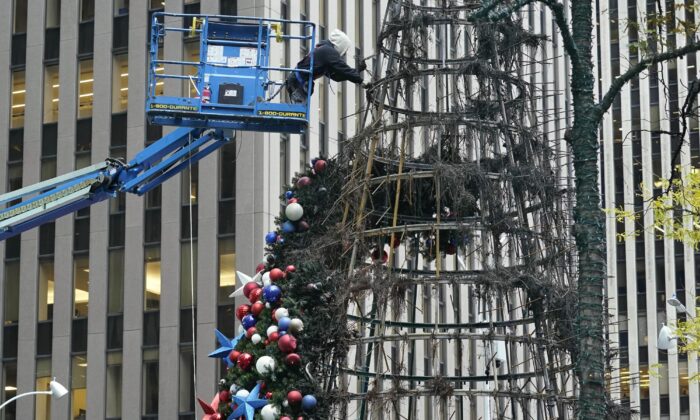 A worker disassembles a Christmas tree outside Fox News headquarters, in N.Y.C., on Dec. 8, 2021. (Richard Drew/AP Photo)
Crime and Incidents

The New York Police Department (NYPD) on Wednesday arrested a suspect for arson after he allegedly set fire to a Christmas tree outside the Fox News headquarters in midtown Manhattan.

In an NYPD statement, police said the suspect, identified as 49-year-old Craig Tamanaha, “climbed” the artificial tree and lit it on fire, causing the network’s “All-American Christmas” tree to become fully engulfed in flames.

Tamanaha was apprehended on the scene by responding officers and firefighters moved quickly to extinguish the flames. No injuries were reported.

The suspect was in possession of a lighter, but it was unclear whether any accelerant was used to start the fire, police said. The cause of the blaze will be determined later by fire officials.

Along with arson charges, Tamanaha is facing a long list of charges, including criminal mischief, reckless endangerment, criminal nuisance, trespassing, tampering, and disorderly conduct. Police said the suspect is homeless and has his last known address in the state.

Brian Kilmeade said in a Wednesday update during “Fox & Friends” that a security officer spotted the suspect walking towards the tree and igniting it.

“Thank goodness we have very excellent security, who within two seconds, tackled [the suspect] to the ground,” Kilmeade said. The show’s co-host, Steve Doocy, said eyewitnesses saw the suspect climbing “about halfway up [the tree] because there is a metal superstructure underneath it” before setting it ablaze.

“The 50-foot tree, which was just lit in a beautiful on-air ceremony on Sunday night, was engulfed in flames and smoke permeated the building,” Fox News Media CEO Suzanne Scott told employees in an internal memorandum obtained by The Epoch Times.

“There were no injuries and thankfully all employees working inside the building remained safe throughout the duration of the fire,” the memo went on to say. The News Corporation building, a 44-story office tower located at the corner of 6th Avenue and 48th Street, also houses The Wall Street Journal and the New York Post.

Scott said the network’s All-American Christmas tree has become “a new wonderful tradition” on Fox Square—a 10,000 square-foot triangular plaza—over the last three years, adding that the company is in the process of rebuilding a new tree.

“We will not let this deliberate and brazen act of cowardice deter us,” she said in the memo. “We are currently planning on a lighting ceremony for the new tree.”