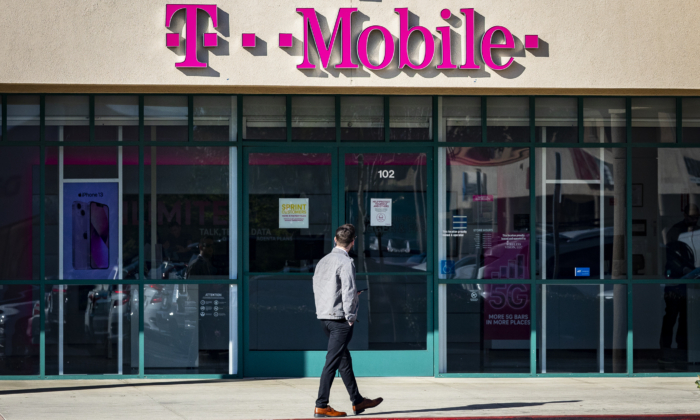 A T-Mobile store that was victim to a smash and grab robbery sits open for business in Fountain Valley, Calif., on Jan. 27, 2022. (John Fredricks/The Epoch Times)
Southern California

FOUNTAIN VALLEY, Calif.—One man has been arrested and two others are still at large after a Jan. 25 smash-and-grab robbery inside a T-Mobile store, according to Fountain Valley Police.

The three males were seen exiting the store at 17850 Newhope Street, carrying Apple iPhones and Apple Watches ripped from the display cases.

When the men ran outside, they saw officers in the parking lot, causing them to drop the merchandise and flee on foot, authorities said in a Jan. 26 press release.

“[A]ll three subjects began violently ripping phones, smart watches, and tablets off of their display stands and alarm cables,” according to a police report on the incident.

The officers chased one of the suspects on foot for about a quarter mile, before catching up with him near Talbert Avenue as the suspect attempted to hide in some nearby hedges.

The suspect was arrested and later identified as Albert Alexander Murkison, 20, of San Jacinto.

He was held in an Orange County jail and his bail was set at $20,000. However, sheriff’s department records indicate he has already been released.

The other two suspects were still at large Jan. 27, authorities told The Epoch Times. They were last seen, authorities said, getting into an older model black Nissan Maxima and fleeing the parking lot.

A total of 11 iPhones and watches worth about $6,700 were recovered at the scene, though they were damaged after being dropped, police said.

Additionally there was $1,000 in damage done to the display cases. No tools, just bare hands, were used in the commission of the crime, according to police.

Authorities said such robberies in Fountain Valley are rare.

“It’s not normal for Fountain Valley, but the cell phone scenario that we got here, that does happen from time to time, where they just go and rip things from the display cases and run out. And in this scenario, our cops were in the right place at the right time and interrupted it,” Fountain Valley police Sgt. Donald Farmer told The Epoch Times.

An employee who witnessed the incident told The Epoch Times that the store seemed to be secure, with alarms and a camera around the back of the building.

There was no indication the incidents were related, authorities said.

Additionally, according to Escondido Police, an Escondido jewelry store was also subject of a similar-style robbery Jan. 26, with two suspects, described as Hispanic male adults, breaking into the store by crashing into it with their car. One suspect broke display cases with an ax.

A number of such robberies have received heavy media attention, especially during last month’s holiday shopping season, as groups in Los Angeles and San Francisco committed such crimes at a number of high-end retail outlets.