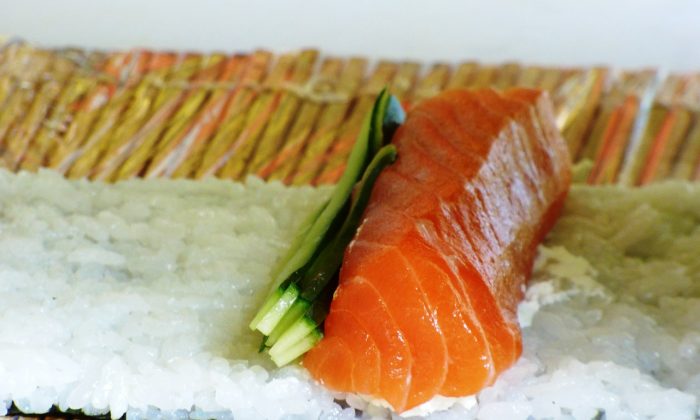 File photo of sushi roll being prepared.(Pixabay/Tomasz Mikolajczyk)
US News

When a man arrived at ER in California wanting to be treated for a tapeworm infection, doctors were skeptical—until he produced a grocery bag with a five foot worm inside.

The patient at first thought that “his guts were coming out”, according to Dr. Kenny Bahn, who treated him at a hospital in Fresno, describing the case on the podcast This Won’t Hurt a Bit.

Bhan was initially mystified by how the patient had contracted the parasite, usually associated with drinking from wells in third world countries.

But the unnamed man hadn’t been out of the country, said Bahn.

“Then he says, ‘the only thing is… I love sushi. Do you think it came from the salmon. I eat salmon almost every day.'”

Salmon are known to carry the parasitic larvae, which can then develop into the full-blown tapeworm in human guts.

However, the cooking process kills them completely. Eating raw fish carries a risk—which is why salmon sushi is flash-frozen, which should make it completely safe.

The patient is now wondering if he has been eating salmon from somewhere that hasn’t been properly treated.

He asked Bahn if the doctors could find any clue from the dead-tapeworm as to where he might have picked up the salmon.

The patient first wondered what was wrong when he experienced abdominal pain and cramping. This then turned to bloody diarrhoea, which got worse. Sitting on the toilet he noticed something odd, and thought he could see his “guts coming out”.

He was scared to death at that moment said Bhan. Then he picked up what he thought was a thread of his entrails—and it started moving.

He was “freaked out”, said Bahn, but relieved that it wasn’t something worse.

He then extracted the whole worm, wrapping it around the center of a toiler roll, and went to the Fresno County Medical Center, where Bahn was on duty at the ER.

Bahn said that people often come in wanting to be treated for worm infections, but it turns out to be wrong.

So he was skeptical when the man first said: “I’m having bloody diaheaorea. I really want to get treated for worms,”

Then Bahn spotted something. “I see next to him he’s got this little grocery bag.” Really hoping it wasn’t a stool sample, he asked: “Did you bring me something?”

It was the worm.

Bahn then unwrapped it, and laid it out on the hospital floor. He reckons it was 5-and-a-half feet long.

According to the CDC, the kind of tapeworm found in fish can reach over 30 feet in length in the gut.

The man was given medication to remove the rest of the tapeworm from his body.