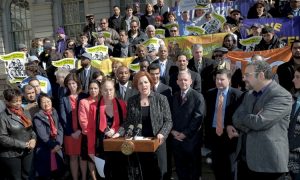 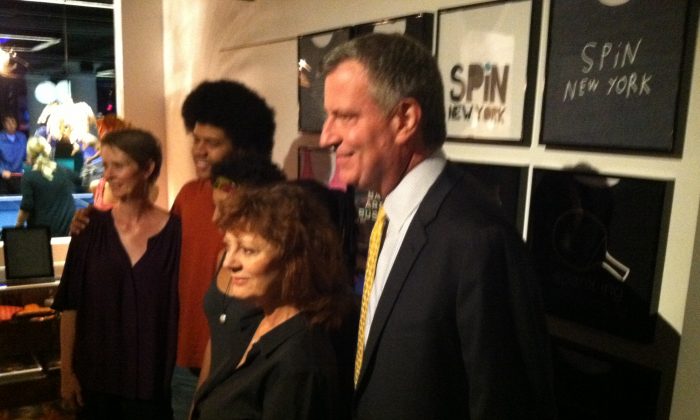 Paid sick leave a key to endorsement
By Kristen Meriwether

NEW YORK—In the summer of 2012, it looked as though actress and activist Susan Sarandon might endorse Christine Quinn for mayor. A simple tweet changed all of that, and with the final sprint to the primary, Sarandon is instead putting her celebrity muscle into helping Bill de Blasio get to Gracie Mansion.

On Sunday at her Flatiron District ping pong club, SPiN, Sarandon hosted a fundraising event for de Blasio. The minimum donation was $50 (although guests could pay more) and roughly 75 supporters showed up to listen to the Oscar-winning actress explain why de Blasio was her choice.

“I was impressed with the idea of Bill’s focus on education because I believe that is what gives you a belief in the future, what gives you hope for a job … which builds a healthier city,” Sarandon said.

Sarandon said originally she was interested in backing Quinn for mayor.

“As a woman I was interested in Quinn,” she said. But Sarandon said she was contacted by a number of groups who were very upset by Quinn’s stand on sick days, minimum wage, and Quinn’s role in helping Bloomberg secure a third term.

The groups began to pester Sarandon on July 18, 2012, after Sarandon sent out a tweet saying, “Spent some time with NY City Council Speaker @ChrisCQuinn. She’s the real deal-smart, imaginative & dedicated. What NYC needs.”

The tweet was met with a backlash, many of whom hit Quinn on the paid sick leave legislation, which Quinn was not bringing up to a vote at the time, citing economic conditions.

The following day, Sarandon tweeted “Thanks all for the info on #paidsickdays will look into it today.”

An hour later she tweeted “SF study says #paidsickdays good for business, aren’t abused by workers. Hope it will be put to a vote. Will talk to Cty Council Spkr [sic].”

Sarandon, who did not take questions from the press at the event, never mentioned any conversations she had with Quinn regarding paid sick leave. The issue did not appear in Sarandon’s twitter feed again.

Neither did a mention of Christine Quinn.

In late March after a firestorm of political pressure, Quinn reached a deal to pass paid sick leave. The bill will not take effect until April 1, 2014, for businesses with 20 or more employees, and October 1, 2015, for businesses with 15 or more employees. A reverse trigger was also added to the bill, meaning if the economy dips below a January 2012 benchmark, the bill will be shelved.

The move was enough for feminist author Gloria Steinem, who had warned Quinn she would only support her if she passed paid sick leave. For Sarandon, it was too little too late.

Sarandon officially endorsed de Blasio on May 2. On Sunday she said she could not back Quinn simply for being a woman, saying as a mother, there were more important issues.

“It is time to focus on an agenda that takes into account holding into the middle class and giving kids a chance,” Sarandon said. “This could make a huge difference in the way this city is focused.”