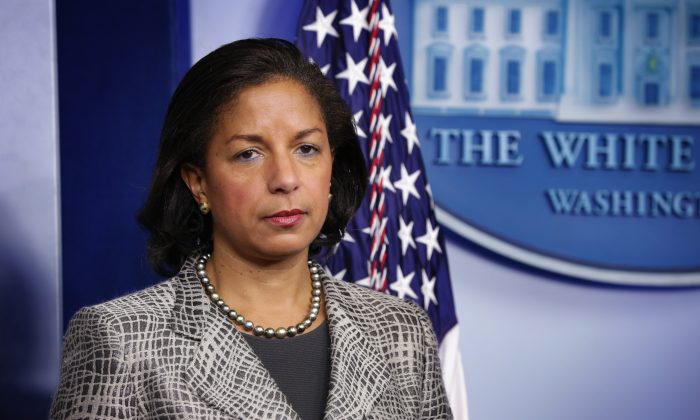 The House intelligence committee is currently investigating the Obama administration’s use of spying and unmasking, and evidence that may be crucial to that investigation has been sealed at the Barack Obama Presidential Library.

Names of U.S. citizens are omitted from communications intercepted by spy departments, but some officials can have those names revealed for their own use—a practice known as “unmasking.”

White House lawyers discovered in February that Susan Rice, former national security adviser under the Obama administration, had requested unmasking on surveillance documents of members of President Donald Trump’s election campaign. According to Bloomberg on April 3, Rice made such requests on dozens of occasions.

The House intelligence committee issued three subpoenas on May 31 seeking information on unmasking requests made by Rice, as well as by former CIA Director John Brennan and former U.N. Ambassador Samantha Power.

Conservative watchdog group Judicial Watch also set out to find information on these requests, filing a Freedom of Information Act request on April 4 that sought information on Rice’s requests regarding the alleged Russian interference in the 2016 elections and any requests that swept up members of the Trump team.

Judicial Watch received its response from the National Security Council on May 23, which it outlined in a June 19 press release.

Rice’s documents on “the identities of any U.S. citizens associated with the Trump presidential campaign or transition team,” it stated, had been moved to the Obama Library, where they’re sealed from the public for the next five years under the Presidential Records Act.

“Documents from the Obama administration have been transferred to the Barack Obama Presidential Library. You may send your request to the Obama Library,” it stated.

Tom Fitton, president of Judicial Watch, stated in the press release that “prosecutors, Congress, and the public will want to know when the National Security Council shipped off the records about potential intelligence abuses by … Susan Rice and others in the Obama White House to the memory hole of the Obama Presidential Library.”

He added, “We are considering our legal options, but we hope that the special counsel and Congress also consider their options and get these records.”