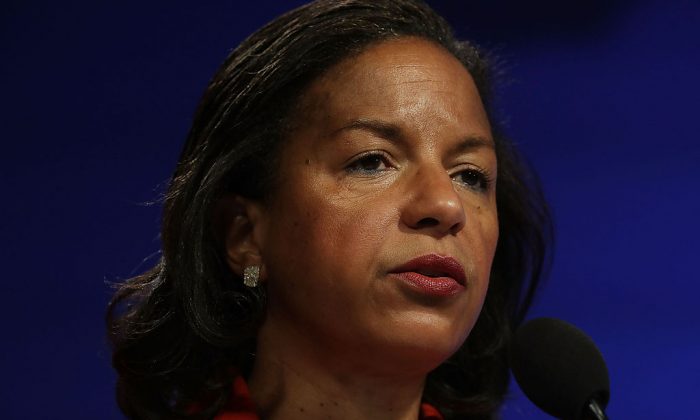 Susan Rice participates in a discussion Oct. 14, 2016, at the Woodrow Wilson Center in Washington. (Alex Wong/Getty Images)
US News

John David Rice-Cameron, president of Stanford College Republicans (SCR), is pressing charges against a female student who he said physically assaulted him on Oct. 9 at an event the group was holding in support of Brett Kavanaugh’s recent confirmation.

Rice-Cameron is the son of Susan Rice, who served as national security adviser under former President Barack Obama.

The SRC students were promoting a debate table that read “Kavanaugh is innocent until proven guilty,” when Melinda Hernandez, a student, allegedly hit Rice-Cameron, who subsequently called police.

Had to take down previous tweet as per request from the student who got assaulted. Here it is:

Some Stanford students were tabling in favor of Kavanaugh and as a result one conservative student, President of Stanford College Republicans, got assaulted by someone. Police came. pic.twitter.com/TZkSLyOm27

In a statement to the Stanford Daily, Rice-Cameron wrote: “She got in my face and proceeded to hit me in the chest area and push me back forcefully.”

“Nobody should be assaulted on campus,” he added.

Stanford Department of Public Safety spokesman Bill Larson told the Stanford Daily there was no apparent physical injury to either party.

Hernandez, as well as multiple witnesses, denied Rice-Cameron’s assault allegations and said she touched him without force, the Stanford Daily reported. Hernandez said Rice-Cameron continued to video record her without her consent, and did not call police in her presence.

The SCR confirmed that Rice-Cameron is pressing full charges against Hernandez, in a post to Facebook on Oct 9.

“Violence is unacceptable and we will not let anyone get away with it,” the post read.

In a statement to Fox News, SCR wrote: “Yesterday’s events are yet another example of the violence and thuggery that is increasingly common from the unhinged left. … People willing to resort to any means necessary to achieve their political objectives must be kept out of power.”