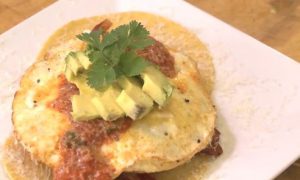 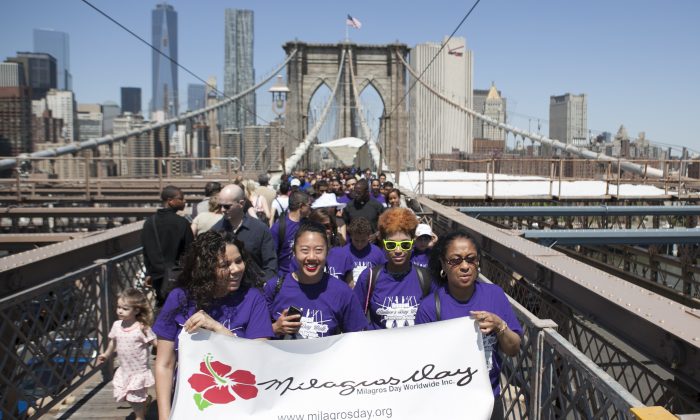 Over a hundred people gathered in Manhattan to walk across the Brooklyn Bridge for the third annual Milagros Day Mother's Day walk celebrating survivors of domestic violence, May 11, 2014. (Samira Bouaou/Epoch Times)
News

NEW YORK—Dawn Diaz by every account is a happy, inspiring woman who’s enthusiasm brightens up every encounter. “I found my value by teaching other women of their value,” said Diaz, founder of Milagros Day Worldwide, a non-profit empowering survivors of domestic violence.

As a third generation survivor of domestic violence, Diaz went through dark cycles in her life, watching her mother suffer and then experiencing the same. But she became determined her son would not go through what she did.

On Sunday, over a hundred people gathered at the Manhattan entrance of Brooklyn Bridge for the third annual Mother’s Day Walk to celebrate survivors and raise awareness. More people waited for the walkers on the other side.

Diaz was a teenager when her mother Milagros left her abusive step-father, but Diaz lost her only six months later to a car accident.

For years, Diaz felt empty, and nothing fulfilled her. “Nothing gave me a sense of belonging, a sense of purpose.”

After resolving to remove herself from her own abusive relationship, Diaz went to a personal growth seminar, where she met Karen Hoyos. Hoyos, now a life coach, helped Diaz create Milagros Day to provide leadership training for other women. “In three months, what was a dream became a reality,” Diaz said. “This is what gave me freedom and what gave me my value.”

A few years ago, Univision newsanchor Merijoel Duran realized her friend was in an abusive relationship.

“She said ‘he hit me,’ and she didn’t want me to see her,” Duran said. It frustrated Duran that her friend felt there was nothing she could do, and was too afraid to call the police. Meanwhile, her friend’s situation escalated, and her significant other brought a gun into the house. “So I called for her, and thank god I did. … And she’s fine nowadays, because she’s no longer in that situation.”

“If you know someone in an abusive relationship, you have to be patient, let them know they don’t deserve to be treated this way,” said Rosylyn Bacon, executive director of Jonah Village, a youth-empowerment organization focused on breaking the cycle of abusive relationships.

About ten million children witness abuse in the home every year in the United States, according to Child Welfare Information Gateway. The psychological and emotional effects are often lasting, manifesting in problems like aggression, depression, poor cognitive skills, and so on. If the cycle isn’t broken, Bacon says, it leads these children into more abusive relationships.

The organization helps teens step out of the cycle, and intervenes when they see an abusive relationship. Bacon teaches five things to say as a way of encouraging victims of a way out, and reminding them of their self-worth.

“When women hear this enough it seeps into their psyche and soul, and they get the courage to leave,” Bacon said.

Getting the courage to leave makes all the difference, many survivors shared.

“It’s something that creates chaos not only in the home, but in the community, and society,” Diaz said. “For us to actually be able to achieve peace in the world, we have to have harmony in the home.”

“Once you take a step outside the door in a forward fashion, you are a survivor, and that’s when life does change,” said VH1 reality TV star Renee Graziano, a domestic violence survivor.

The relationship started when Graziano was 20, and was abusive from the beginning. It would start with fits of jealousy that ended with black eyes, and “I was too young and foolish and in love with somebody with his own problems—his own mother was abused.”

It wasn’t until Nov. 29, 1998, Graziano said, that she was dragged down a flight of stairs. She looked up and saw her son looking at her helplessly between the bars of the stair rail.

“I got up, I went to church—I’ll never forget it—and there was a piece of paper on the pew that said ‘After the long, dark storm, there will be light,’” Graziano said.

Soon after, her husband was arrested and Graziano felt free for seven years. But when he returned, the relationship continued as it had before. After he was put away again, she woke up. She felt as if she had been brainwashed, and her perspective changed entirely when she started to think of herself.

“God got me out the door,” Graziano said.

“Everything is possible if you choose to use that pain for good.” – Karen Hoyos

Celebrity life coach Karen Hoyos was in an abusive relationship until she found a gun to her head and knew she needed to get out. She went to a personal development seminar and, seeing the speaker on the stage, knew it was her calling.

Her life had been sorrow, pain, and suffering until the moment she found her purpose, Hoyos said. Then she did everything she had to to change her life around and invest in herself.

“For me, the key is purpose. If you have purpose, everything’s possible,” Hoyos said. And Milagros Day tries to raise awareness to this principle.

“They are not really victims, they are survivors with a purpose. It doesn’t matter what’s happened in their life, everything is possible if you choose to use that pain for good,” Hoyos said.

Writer and speaker Lisa Lieberman-Wang at the Manhattan entrance of the Brooklyn Bridge for the third annual Milagros Day Mother’s Day walk, May 11, 2014. (Samira Bouaou/Epoch Times)

“I’m going to give you the best advice I was ever given, and it was from my grandmother, and it was ‘take care of your mother’s daughter,'” said life coach Lisa Lieberman-Wang. “Love the world first. We’ll change the world by changing ourselves.”

Lieberman-Wang suffered through abusive relationships, depression, and eating disorders, ending up in the hospital five times.

But she changed her perception.

“I actually changed my thinking and I chose not to be a victim,” Lieberman-Wang said. “What happened to me wasn’t me, it was the meaning I gave it.”

Eleanor George, now a writer, teacher, and motivational speaker, is a domestic violence survivor who has gone through some of the Milagros Day programs.

“We went ziplining, and it was called the ‘flight to freedom,’ where you took all of your fears, and stepped off. That was crucial for me,” George said. “I was stepping out, despite my fears.”

Years ago, a big argument with her abusive husband finally led George to call the police. But it was in the early 1980s, she said, and the police would not take him away the first or second time she called. But when she called from a neighbor’s house after the argument, they offered to take her.

“Why did you let him hit you? Why didn’t you just leave?” it was a culture of shame at the time, George said, and so often the perpetrators put on a congenial face to the community in contrast to what happened behind closed doors.

She had suffered years of abuse, including being beaten all day until she was sent to the hospital, eight-months pregnant.

“I will never look back,” George said.