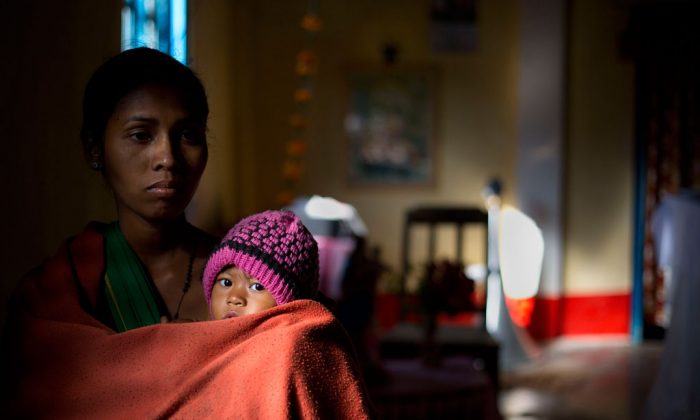 An Indian tribal woman with her child arrives for Christmas prayer in a church where they have taken refuge after fleeing from their village when it came under attack by an indigenous separatist group, in Shamukjuli village in Sonitpur district of Indian eastern state of Assam, Thursday, Dec. 25, 2014. Police says the death toll from rebel violence in remote northeastern India has risen to over 70 with the recovery of more bodies from abandoned villages. (AP Photo/Anupam Nath)
India

SHAMUKJULI, India—Instead of celebrating Christmas in her home, Rina Vor and her four young children were huddled in a church Thursday along with hundreds of other survivors of a rebel massacre that killed 72 members of her tribe.

Vor said she putting her kids to sleep in her village in India’s remote northeast when she heard the gunfire. She quickly gathered the children and ran to the church for safety, leaving behind her house and belongings.

The attacks late Tuesday in Assam state’s Sonitpur and Kokrajhar districts — the worst in months in the ethnically mixed region — were carried out by a faction of an indigenous Bodo tribe, which has been fighting for a separate homeland for decades. The rebels have been targeting other communities they consider outsiders — Adivasis, whose ancestors migrated to Assam more than 100 years ago to work on tea plantations — as well as Muslims, accusing them and the federal government of exploiting the region’s wealth while neglecting the locals.

The violence has left at least 10,000 people dead, most of them civilians, in the last three decades. In May, the same rebel faction called the National Democratic Front of Bodoland shot and killed more than 30 Muslims.

In the latest attack, the area of Shamukjuli saw some of the worst bloodshed with 26 people killed. Police said many were women and children.

“There will be no celebrations for Christmas for us,” Vor said as she wept.

The Adivasis are a mix of Hindus and Christians, and many like Vor were preparing for Christmas when the attack took place.

In a nearby school that opened its doors to the refugees, 7-year-old Sanjlai Hemrom looked afraid and traumatized as he sat silently with his younger brother. Villagers said the boys lost both parents in the attacks.

A curfew remained in the two districts Thursday, but there were no reports of fresh violence, said S.N. Singh, a local police official.

Bodos make up 10 percent of Assam’s 33 million people and took up arms as long-simmering tensions over land and jobs morphed into the ethnic violence pitting one tribe against another. They are among dozens of rebel groups fighting the government and sometimes each other in seven states in northeast India.

The rebels may have been provoked by heavy losses they suffered recently as police intensified operations against the group, Singh said.

There were concerns the violence could spill over.

He also said there were incidents of Bodo homes being attacked, but troops had managed to control the situation.