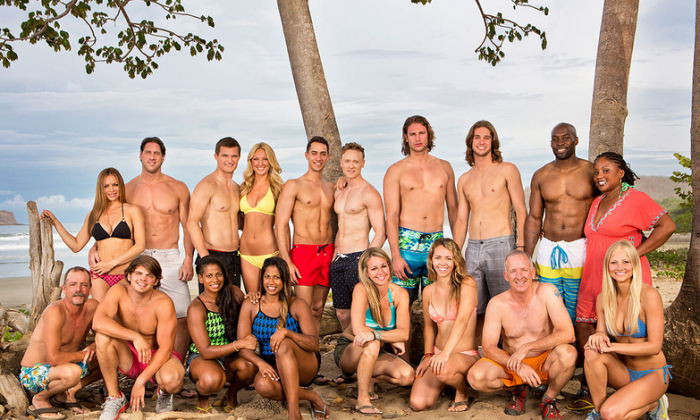 The cast for Survivor: San Juan del Sur — Blood vs. Water has been revealed.

Nine pairs are set for the season, which was filmed at San Juan del Sur in Nicaragua from early June to mid-July.

Headlining the cast is Nadiya and Natalie Anderson, the twin sisters who were featured on two seasons of The Amazing Race.

“I think this is a couple of notches up from The Amazing Race,” Natalie told Entertainment Weekly. “You’re taking away the human basics and the things you yearn for the most, which is comfort and warmth and food.”

Former pitcher John Rocker will be competing with his girlfriend Julie McGee, who owns a spray-tan business. Rocker is infamous for negative comments about immigrants and other groups. But Rocker isn’t concerned that the comments will be held against him if he’s recognized on the island.

“I see these folks that I’m getting ready to play this game with as very similar to the 13 years of professional baseball that I played, and the teammates that I played with. Some of my biggest supporters after that SI debacle were my current and past teammates,” Rocker told EW.

The other pairs are:

Missy Payne, 47, and daughter Baylor Wilson, 20, of Dallas. Missy owns a competitive cheerleading gym and Baylor won the 2009 Cheerleading World Championship. Baylor is a student at Belmont University who lives in Nasvhille.

Jeremy Collins, 36, and wife Val, 35, of Foxboro, Mass. Jeremy is a former professional football player who is now a firefighter while Val is a police officer.

Dale Wentworth, 55, and daughter Kelley, 28. Dale is a farmer in Ephrata, Washington while Kelley is a marketing manager in Seattle.

Fire captain Keith Nale from Shreveport, Louisiana is paired with 23-year-old son Wes, who is also a firefighter.

Survivor season 29 is slated to premiere on September 24.