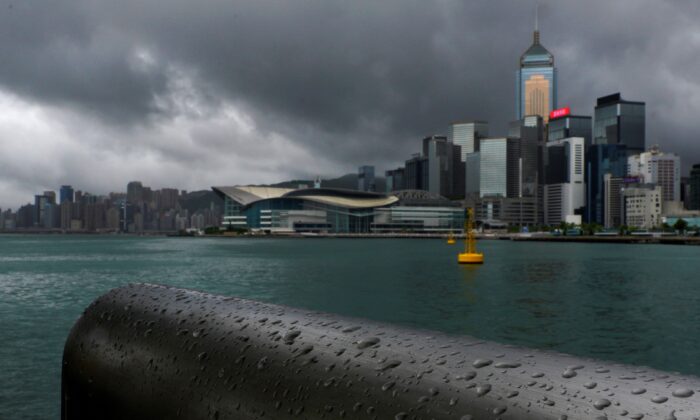 Surviving the Storm in Hong Kong

By the time this article is out, Hong Kong would have already been hit by a tropical storm Ma-On (馬鞍) that will bring already a “quiet” Hong Kong to a standstill. Damages done by a typhoon are acute, and the city always recovers and goes back to normalcy.

But for those who still remain in the city, have constantly witnessed the dismantling process getting worse by the day, since the social movement in 2019 and subsequently with the COVID “zero tolerance” policy. How quickly will Hong Kong turn into just another Chinese city, with a high level of surveillance and restriction of freedoms? It is all happening now.

With former Chief Executive (CE) Carrie Lam gone, and now former police and hardliner John Lee taking over the helm as CE who just follow Beijing orders, this sense of hopelessness was unimaginable years before. Hong Kong indeed is run like a police state, and the “rule by fear” tactics are just shocking. The pan-democratic camp is all wiped out in two short years.

Close to around 2,700 people are now detained in the Hong Kong prison system, with most of the cases related to the social movement of 2019. Of the 2,700, over 200 activists and politicians are alleged to be in violation of the Hong Kong national security law (NSL). Their “crime?” Organizing a primary within the pan-democratic camp; hosting the candlelight vigils for the 1989 Tiananmen victims, or being the trustees of a humanitarian fund whose core function is to provide legal aid for those arrested during the 2019 social movement.

These activities should have been well protected by the Basic Law of Hong Kong, but not anymore.

As far as businesses are concerned, and reiterated with warnings and signals by the different international chambers of commerce in the city, the NSL purge and the strict COVID restriction in Hong Kong have been a big deterrent for foreign investors to continue pumping money into Hong Kong. That said, most multinationals and investment banks have contingency plans for Hong Kong, and this time, political risks are not just taken into consideration, this factor carries the most weight.

The U.S.A. and Canada have issued “warnings” for their citizens who travel to Hong Kong due to the city’s political instability.

The Hong Kong headline news is the 47 activists and politicians who were alleged to seize “the ruling power” of Hong Kong; and the Apple Daily seven, with founder Jimmy Lai and the other 6 senior executives of the now defunct newspaper, are alleged to be in violation of subversion under NSL.

These baseless charges are indeed laughable, but no joke to those in power. Some of the NSL “suspects” are fortunate enough to be remanded on bail, they still have freedom of movement before the trial; but for the majority of NSL “suspects” who are remanded in custody (locked in prison), they will have a difficult time to keep fighting the long court battle.

Over the last two years, the Chinese Communist Party (CCP) was crushing Hong Kong through its various agents. What worries us most is that Beijing wants obedience and control, while the puppet Hong Kong government has failed to bring hope and opportunity to Hongkongers. How can Hong Kong people still have dreams? Like a derivative option of an equity investment product, the “time value” of Hong Kong is running out and decaying fast, and people’s stress levels are immeasurable.

The upcoming Hong Kong 47 and Apple Daily cases are surreal, and it proves again and again that when Hong Kong is ruled by tyranny, it is also our moral obligation, wherever you are, to voice out loud that these activists have stood up vehemently and sacrificed so much, to defend the freedom of Hong Kong. They have kept their faith.

Given the political situation in Hong Kong, some people feel threatened and are thinking of a better future elsewhere. My advice is simple: raise your cash level, sell your real estate holdings, don’t speculate, and park your assets offshore as quickly as possible, and outside the Hong Kong jurisdiction. You still have time before it becomes too late. The biggest asset usually comes from real estate, and you will be lucky if you can get rid of it at fair market value quickly.

Finance Secretary Paul Chan recently commented that the Hong Kong real estate market could “get softer.” One should calculate their family’s net worth carefully. On a more technical basis, for currency hedge, one could convert their Hong Kong dollars (HKD) into US dollars (USD) to spread out the currency risk.

For others, it also means diversification into other foreign currencies, like the “five eyes” countries, that is British Pounds, NZD, AUD, and CDN. EU, SGD, and the JYP are potential currency hedges.

Since 1983, the Hong Kong dollar (HKD) is pegged with the US dollar (USD) at a narrow trading band. It ranges from HK$7.75 and HK$7.85 to the USD, and the HKD is the 13th most widely traded currency worldwide.

Whether the peg will remain intact moving forward is more a rhetorical question, they are real concerns here. As a USD buyer, it comes to your advantage when the HKD is on the strong side of the peg, which is at the band of US$1 to HK$7.75.

Finally, as we try to come up with defensive actions against tyranny, it is difficult to understand what Beijing really wants. For those who stay behind, we give them all the blessings we can. Leaving Hong Kong is still a viable option, and like the old adage goes: nothing ventured nothing gained. Goodbye Hong Kong. Hello, the world!