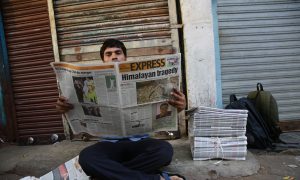 How I Survived the Mumbai Monsoon Like a Mumbaiker

The first leg of a heavy monsoon season in India has many Mumbaikers hunkered down to avoid dangerously flooded streets. Although locals are used to heavy yearly rains, which bring relief from the heat and life to farmlands, this year’s rain is different.

The city of Mumbai just experienced the second largest rainfall for a two-week period in a decade: 35.4 inches. June 19 was a high point—literally—as the rains shut down local trains, stranding commuters on a system that transports over 6.5 million people per day. Schools and businesses were also shut.

I have some personal experience of the Indian monsoon, and reflecting on it gives me pause for the country’s 1.25 billion people who face this yearly reality.

It was my first time in the country, and the rain started in earnest when I was in one of those classic Mahindra three-wheeled autos in the middle of a flooded intersection in the dark. Our elders had advised us against going out in the heavy rain for a relatively long trip through the city to see a musical performance.

The driver had his pedal to the metal, brrrrroooom, brrrrroooom. It was like, by pressing on the gas again and again, he was willing the vehicle to move.

I start whimpering: “Oh my goodness. Is this a flood?

It was moving, but only by mere inches at a time, gasping forward, as the waters lapped at the floor threatening to engulf us. The rain pelted the slight roof as we peered past jerry-rigged black plastic that stood for a window and protection from the elements. It looked like an ocean out there, complete with whitecap waves.

I start whimpering: “Oh my goodness. Is this a flood? Are we going to be okay?” I was quickly assured that we would be. Not a big deal? The motor revving suddenly went too far, and the driver blew out the motor, forcing us to step out of our tenuous sanctuary and into the deluge.

Are you serious? Yes. We walked through the midcalf, deep flooding, and by some miracle we caught another ride.

Part two of my story is to be continued … after this important interlude.

I spoke with my father-in-law last night and he told me about this year’s Mumbai rains. He said he and his wife were worried and afraid about their ability to obtain their daily basics. Used to being able to walk and buy a day’s worth of vegetables from the kirana local shop, he rightfully felt a staple of daily life was under threat. And even if he could navigate the waters, the stores are not open, he added.

Around 80 percent of the 350,000 shops in the city were shut on the day Mumbai was brought to a standstill thanks to the incessant rainfall. A good number of the shops were also flooded, with estimated losses in the millions of dollars.

It is a common refrain in India to blame the government for incompetence in city maintenance. It has been 10 years since the BMC accepted the responsibility of upgrading the city’s 100-year-old drainage system and constructing new pumping stations. The task was taken on after the last disastrous bout of rain in 2005.

“The BMC is one of the richest civic bodies and they cannot say lack of funding caused the delay,” urban planning and design expert Ashok Datar told Indian television broadcaster NDTV.

A 2013 report by the comptroller and auditor general also blamed BMC for the continued flooding, since it found only 30 percent of the work had been completed, along with major cost overruns.

Remember that dirty packet you threw on road instead of dustbin? Yeah that is what is floating around you now. #MumbaiRains

An official from BMC headquarters countered that sewers cannot be fixed as slums cannot be cleared to make way for the work. He said when authorities try to clear the area, street dwellers typically go to court and win stay orders. It is a typical example of how complicated some simple things are to achieve in the world’s largest democracy, where politicians, laws, and the courts often work at odds with each other.

On the way back from our event that fateful night I had a run-in with the city’s infamous broken sewers.

“Where we have been able to remove encroachments and undertake drainage-widening works, there was no flooding yesterday,” said Municipal Commissioner SVR Srinivas to NDTV after the June 19 floods.

Swallowed by a Sewer

On the way back from our event that fateful night I had a run-in with the city’s infamous broken sewers. (Although I didn’t know at the time of their fame).

We were not far from home when we were stopped by yet another flooded intersection. This time the driver told us he wasn’t driving through it. He asked us to get out.

I got out first so that my friend could access his wallet to pay for the ride. When I looked around, I immediately became concerned that I was standing in the middle of a busy intersection, alone. We were traveling in a tiny auto, but there were larger cars and trucks around me looking for a route through the chaos. I decided to walk to the edge of the road where I thought I would be safer.

Bottled Water Is a Trend in US, China, and India—but for Different Reasons

I could not see the road clearly. It was flooded past my ankles, and the cobblestones looked glassy through the rainwater. I walked slowly … and then abruptly … I dropped—about 3 feet down into a murky pit.

Suddenly, I hear from my friend. “What are you doing?”

“What do you think I am doing? Help me out of here!” I yelled.

Did I seriously fall into an open sewer? It was hard to believe, but that is what I was told had happened. The next day I read in the newspaper about a little girl who died after falling in a sewer that same night.

In India, a visitor learns to look carefully before stepping, as obstacles appear everywhere to someone unaccustomed to the lurking traps of daily life. Locals would never have been so stupid—nor so polite, feeling like they had to get out of the way of the traffic.

Mumbaikers are not out of the woods yet. The rains haven’t stopped, and they don’t intend to anytime soon. As of June 23, this year’s monsoon had delivered nearly 3 feet of rain, with daily rainfall totals on six of those days exceeding 4 inches, according to Accuweather senior meteorologist Kristina Pydynowski.

On June 22, landslides triggered by heavy rain had blocked the Mumbai-Pune Expressway, stopping traffic. Due to the landslide that took place near Khandala, a popular hill station, authorities had to divert traffic. Commuters on foot and all manner of transportation continued to slog through the wet, hot, dirty, city. At the day’s end, the lucky ones looked forward to warm food prepared by loving women.

Thunderstorms and highs in the mid 80s are predicted until at least July 5, when the chance of thunderstorms falls to 50 percent, according to weather.com.

Ironically, when the rains finally subside locals face another problem. A drier weather pattern on the horizon is already starting to heighten fears of a summer drought.