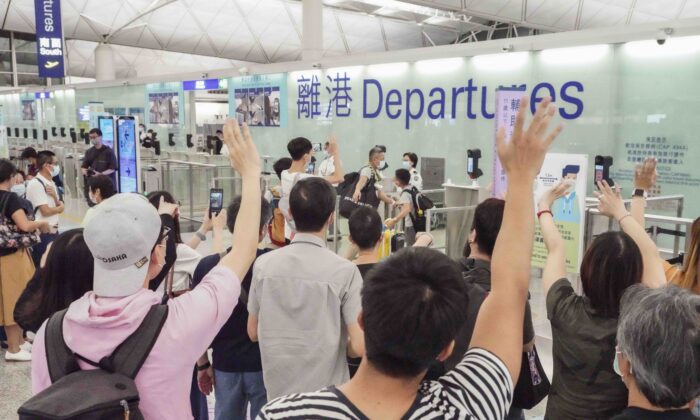 Hong Kong’s recent emigration fair was very popular, the number of attendees increased significantly relative to the previous fair. Many said that they are planning to leave Hong Kong within the next two years. Renowned actress Lana Wong Ha-wai says that she will leave Hong Kong in August this year.

The 3rd “International Immigration and Property Expo” was held on June 11 and 12 at the Hong Kong Convention and Exhibition Centre. Prior to the exhibition, the organizer collected 35,000 surveys from prospective visitors who registered online. The survey results showed that 79 percent of the respondents plan to emigrate within two years, and 19 percent intended to leave Hong Kong within six months.

The survey shows that the three most popular countries are the United Kingdom, Canada and Australia, accounting for 31 percent, 22 percent, and 21 percent respectively.

The survey also shows that families who are financially better off tend to emigrate more—66 percent of the respondents have a net worth over HKD $8 million (about $1.02 million) and 17 percent have assets worth more than HKD $50 million (about $6.37 million). Of those who plan to leave, 30 percent are in the group with a monthly household income over HK$150,000 (about $20,000).

According to the organizers, 30,000 people attended the Expo last year and the number of visitors increased by 30 percent this year. The number of exhibitors also increased by 20 percent compared to the previous year.

Immigration consultant and former Australian immigration officer May told The Epoch Times that the number of clients asking for advice on immigration to Australia is double that of the previous year, with the destinations mainly being Sydney, Melbourne, and Brisbane. She also pointed out that the approval rates of applicants rose compared to previous years, with a success rate of 80 percent.

Renowned actress Lana Wong Ha-wai announced on June 10 that she will leave Hong Kong this August. The actress is 92 years old. In her Facebook post, she said that she will miss her fans.

“I don’t know when I will come back to Hong Kong to see everyone again! I don’t know if I will be missed. But right now, no matter where I am in the world, I will miss all of you! On the 12th of this month, I will have my last video interview with my manager Simon, I will miss this moment forever!”

She also mentioned the 2012 Dolce & Gabbana photo-banning incident saying: “I have been working with Simon for 10 years. Since the D&G incident, he told me to care about social issues and taught me to be humorous. It was a difficult time but I was happy!”

The post has 20,000 responses, and fans said they were sad that she has to leave but wished her all the best in the future.

Lana Wong Ha-wai has been active in many social issues and protests. She participated in the campaign against the 2019 Hong Kong extradition bill, where protestors joined hands to form a human chain. She was also a part of the protest against the Italian luxury brand D&G’s photo-ban in 2012. At the time, D&G branches in Hong Kong allowed only mainland Chinese customers to take pictures but not Hong Kong people. This led to anger and protests among Hong Kongers, and the brand eventually apologizing for the photo ban.

Also, during Chinese New Year, Lana Wong Ha-wai used to go to the Sik Sik Yuen Wong Tai Sin Temple, dressed as different Chinese zodiac signs, to pray for herself and Hong Kong, which was photographed by the media on many occasions.