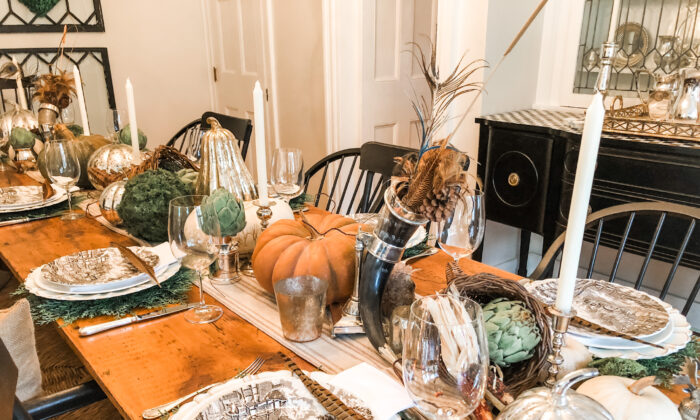 The Thanksgiving table is Nadine's favorite to set; she goes all-out for the holiday, often drawing inspiration from Mother Nature. (Courtesy of the Isacs family)
Economy

The annual Farm Bureau Thanksgiving survey has revealed that the cost of food for the traditional holiday meal has increased by an average of 14 percent, largely due to the heightened cost of turkey.

The traditional shopper survey evaluated prices between Oct. 26 and Nov. 8, approximately two weeks in advance of the holiday.

Let’s talk turkey. According to Farm Bureau’s #ThanksgivingSurvey, here’s what a few Thanksgiving staple items will run you this year:

The most noticeable difference on the menu involved the traditional Thanksgiving turkey.

“The centerpiece on most Thanksgiving tables—the turkey—costs more than last year, at $23.99 for a 16-pound bird. That’s roughly $1.50 per pound, up 24% from last year, but there are several mitigating factors,” the survey added.

“Several factors contributed to the increase in average cost of this year’s Thanksgiving dinner,” AFBF Senior Economist Veronica Nigh said in a statement released with the survey’s results.

“These include dramatic disruptions to the U.S. economy and supply chains over the last 20 months; inflationary pressure throughout the economy; difficulty in predicting demand during the COVID-19 pandemic and high global demand for food, particularly meat,” she added.

Further, “The trend of consumers cooking and eating at home more often due to the pandemic led to increased supermarket demand and higher retail food prices in 2020 and 2021, compared to pre-pandemic prices in 2019.”

Butterball CEO Jay Jandrain told Fox News in a recent interview that it’s likely American families will see more expensive Thanksgiving turkeys this year and that smaller ones will be harder to find as inflation remains stubbornly high and the supply chain crunch roils on.

Jandrain told the outlet on Nov. 2 that, while he doesn’t expect overall shortages of turkeys, “we do see there will be fewer small turkeys this year,” and advised shoppers to “go out to the stores and get them as early as you can.”

At the same time, Jandrain said retailers have been ordering more turkeys in the face of increased demand and it’s “reasonable to expect” higher prices.

“We have seen food prices increase overall. That’s something we’ve all experienced recently. While we don’t set the prices for our retailers, it is reasonable to expect there will be some increase of costs this year,” Jandrain said.