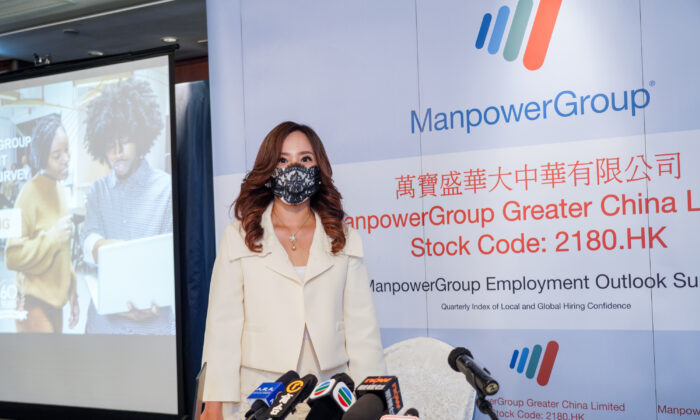 Information Technology (IT) has the biggest talents shortage
By Terence Tang

A survey by a human resources agency found that Hong Kong employers are cautiously optimistic about their intention to recruit in the coming quarter. According to seasonally adjusted data, the net employment outlook index for the coming quarter is positive 11 percent; 83 percent of the local employers surveyed think it will be difficult to fill vacancies. Among them, Information Technology (IT), Sales and Marketing are the two most affected.

ManpowerGroup Greater China announced today, June 14, the employment outlook survey report for the third quarter of 2022. Of the 515 local employers surveyed, 38 percent plan to increase their workforce in the next three months, while 27 percent say they will reduce their workforce, and 34 percent say they have no plans to adjust their current workforce in the coming quarter. The seasonally adjusted data also showed that the employment outlook index for the coming quarter was at positive 11 percent, indicating that Hong Kong employers were cautiously optimistic about their hiring intentions in the coming quarter. The net global employment outlook also recorded a thirty-three percentage points increase, an upturn of 4 percent from the second quarter and an increase of 18 percent year-on-year, while the global talent shortage was the highest in 16 years. Lancy Tsui Yuk Shan, senior vice president of the agency, said that, “Employers often need to hire a large number of talents and fill vacancies in a short period of time, which also has continued to increase the demand for workers on flexible terms.”

Bright Outlook for IT, and Catering

The survey found that the employment outlook is the most optimistic for the IT and communication media industry, with the index recording a gain of thirty-one percentage points—an increase of 4 percent quarter-on-quarter and a year-on-year increase of 31 percent. Ms. Tsui also stated that, “As the boom of digital transformation continues; both traditional and start-up companies will adopt their own digital strategies, causing a strong demand for IT talents. As more and more companies implement hybrid and remote working models, they need more cybersecurity researchers and cloud engineering personnel to support their frameworks, therefore pushing up the demand. Different industries also need to analyse customer and market data through big data, which requires more engineers in machine learning. New forms of communication media, such as the Metaverse, will continue to increase the demand for talents who are proficient in digital marketing and customer relationship management.”

The catering and hotel industry recorded an increase of twenty-four percentage points, an upturn of 29 percent quarter-to-quarter and a year-on-year increase of 24 percent. Ms. Tsui said that, “The resumption of dine-in dinners in the local market, coupled with the issuance of the second phase of electronic consumption coupons in the third quarter, and the surge in demand for banquets with fewer than 120 people, have gradually improved the catering business. It is expected that the business volume will return to around 60 to 70 percent of that before the pandemic. These are all evidence that the prospect of the catering industry is brighter than the previous quarter.”

The construction industry outlook index rose by 8 percent quarter-to-quarter and 15 percent year-on-year. In view of the promotion of various large-scale development projects, urban renewal projects and the likes, the construction industry in Hong Kong is expected to hire a large number of workers. Compared with 2021/22, the overall construction volume in Hong Kong is expected to increase by 28 percent and 50 percent by 2030/31 and 2040/41, respectively. In order to ensure the quality of works, the regulatory agency has to increase manpower to perform monitoring work, pushing employers to recruit likewise. However, Ms. Tsui said that, “There is currently a shortage of construction professionals by as much as 20 percent, which is expected to put more pressure on the employers.”

Eighty-three percent of local employers find it difficult to fill vacancies. The global talent shortage continues to rise. ManpowerGroup surveyed more than 40,000 employers in forty countries around the world, and 75 percent said it was difficult to fill vacancies, an increase of 6 percent compared with last year. For employers in the Asia-Pacific region, the most difficult places to fill vacancies are Taiwan (88 percent) and Singapore (84 percent), while 83 percent of employers in Hong Kong say so, similar to China and India. The top five jobs with talent shortages are IT (49 percent), sales and marketing (30 percent), manufacturing and production (27 percent), administration and office support (26 percent) and operations and logistics (23 percent).

Hong Kong is in the midst of a large-scale emigration and suffering serious exodus of many professionals and talents. But Ms. Tsui added that, “Such an exodus is not a main cause this time as these industries had been facing the shortage for a long time.” Ms. Tsui also mentioned that, “In order to retain talents, many companies will issue bonuses and improve welfare, which has gradually become a new trend.” Citing this year’s talent shortage survey, over 40 percent of the more than 40,000 employers surveyed worldwide said they would increase employee training, 39 percent would offer flexible working hours, and 28 percent would offer flexible working locations.