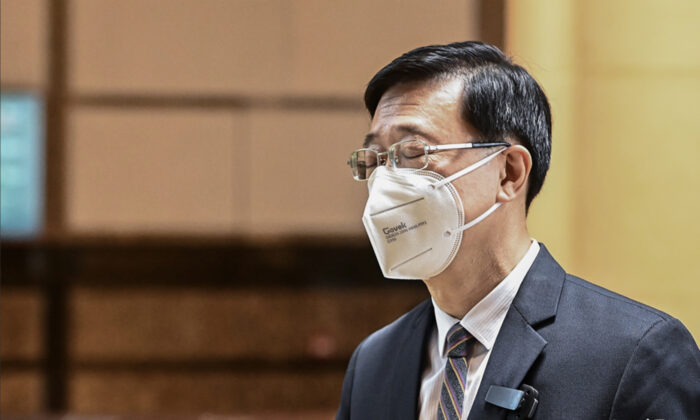 Only 32 percent of interviewees are satisfied with the current Hong Kong  government.
By Ying Cheung

Latest Hong Kong Public Opinions findings, John Lee Ka-chiu’s popularity rating is 53.8, which ties with Leung Chun-ying for being the lowest among all past and incumbent Chief Executives at the beginning of their terms.

The general public’s satisfaction rate and trust in the government have improved, returning to the level of before the anti-extradition campaign in 2019.

The latest public opinion survey shows that the score for Chief Executive John Lee Ka-Chiu is 53.8 (out of 100). Among those surveyed, 12 percent of the respondents gave Lee zero out of 10 points. In addition, on the Hong Kong government as a whole, the latest satisfaction rate was 32 percent, with the dissatisfaction rate at 43 percent, a net satisfaction rate of minus 11 percent. It would imply, on an overall basis, somewhere between “somewhat not satisfied” and “50-50.”

The survey was conducted by the Hong Kong Public Opinion Research Institute (HKPORI) from July 4 to 7, via telephone interviews with 1,003 randomly selected Hong Kong residents. According to the survey, Lee’s first score after taking office was 53.8, which is the same as that of Leung Chun-ying after taking office in 2012.

So Lee’s score has improved since the March poll.

In average quantitative terms, it is equivalent to 2.7 (out of 10) points.

In terms of trustworthiness, the latest survey found that 47 percent of people trust the government, while those that distrust is at 31 percent, with a net trust value of positive 16 percentage points.