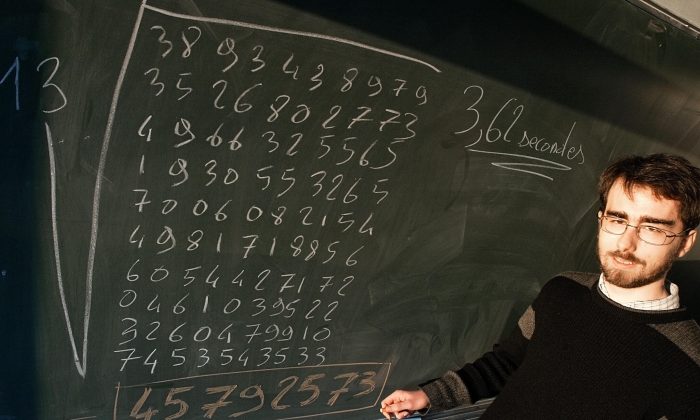 Alexis Lemaire, 24, posing in front of a blackboard in Reims, France, 20 December 2004 after he set a new world record as he became the first person to figure out the 13th root of a 200-digit number by mental arithmetic alone. (FRANCOIS NASCIMBENI/AFP/Getty Images)
Education

Survey: 1 out of 5 Adults Have Forgotten How to Do Fractions or Percentages

At least a fifth of adults have forgotten how to perform basic mathematical equations taught in school, according to a new survey.

One in five adults don’t know how to calculate fractions or percentages anymore, and more than 1/4 have forgotten how to calculate the mean, mode, and median of a set of numbers, the Guardian reports.

The survey was conducted with 2,000 adults.

Of long division and multiplication, more than 20 percent had forgotten, and of figuring out the square root of a number, more than one in four.

A 2012 poll found that almost half of British adults had the mathematical capability of an 11 year old.

The ignorance was not limited to math alone; 17 percent no longer knew how to use an apostrophe, and 18 percent when to put in a comma. In the sciences, 24 percent no longer remembered all the planets in the solar system, and 21 percent had forgotten about photosynthesis.

“Being unable to remember the mean, median and mode, or the correct use of a colon may not seem like a big deal, but the lessons we learn at school remain very much important in later life,” Dr. Nick Smith, founder of the Oxford Open Learning Trust, told the Guardian.

What Is the Secret to Being Good at Maths?

The phenomenon of adults having forgotten what they’ve learned in school is not new. A 2012 poll found that almost half of British adults had the mathematical capability of an 11 year old, the Independent reports, up 12.5 percent from 8 years ago.