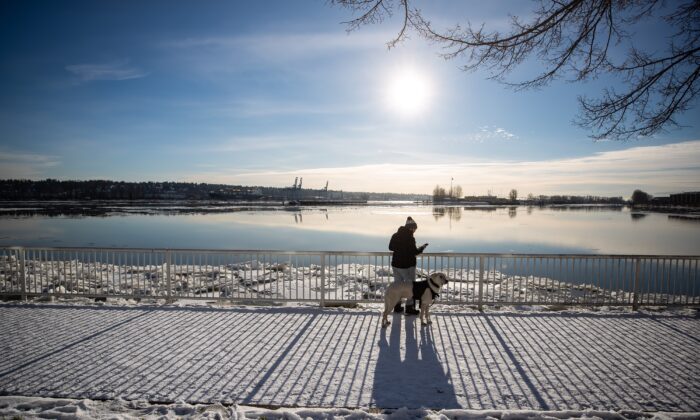 A man checks his phone as ice floes build up on the Fraser River in New Westminster, B.C., on Dec. 28, 2021. (Darryl Dyck/The Canadian Press)
Canada

How the Government Gets Canadians’ Cellphone Data

Besides data from carrier Telus, the Public Health Agency of Canada (PHAC) has been relying on companies that collect data through smartphone apps in order to get anonymized movement records of Canadians, The Epoch Times has learned.

It was revealed in December that PHAC has been conducting mobility analysis of Canadians, in part to inform pandemic policies and public messaging and to assess the effectiveness of lockdowns. PHAC said it did not and will not track individual Canadians, but rather looks at anonymized trends.

The CRC now tells The Epoch Times that it procures its cellphone data from commercial vendors of crowd-sourced information that collect data through smartphone apps to gather anonymized movement records of Canadians.

CRC is obtaining data from Tutela, a company that specializes in measuring the performance and coverage of mobile networks. Tutela has offices in Victoria, B.C., and Boston, Massachusetts, and is linked to U.S.-based company Comlinkdata, with the two sharing the same Boston address.

Tutela says on its website that it collects data from 300 million smartphone devices worldwide, doing so by embedding its software within over 3,000 applications.

It’s not clear which applications specifically run Tutela software, but it could be anything from games to weather apps. This means some of the apps on Canadians’ phones could be transmitting data back to Tutela, which then resells the data to various buyers such as telecommunications companies and at least one government body.

Tutela says the data is collected with the consent of users and that it does not gather any “persistent device identifiers or personal information that directly identifies individuals.” A section of its website lists options for people to opt out of having their data collected, such as by uninstalling the apps entirely or by not allowing apps running Tutela software to access location data.

The Epoch Times reached out multiple times to Tutela for comment but didn’t hear back.

Whether the data is obtained from Telus or commercial vendors like Tutela, CRC says the data contains information for an “anonymous, varying, and random subset of smartphone devices. All personal identifiers were removed before CRC received the data, so it was not possible to identify specific individuals.”

“Such data is useful for drawing aggregated conclusions about population-level statistics with respect to smartphone experience and mobility, it is not useful for tracking specific smartphone users,” a CRC spokesperson said in an email.

The organization says the type of data received is similar to what traffic applications collect to pinpoint locations of vehicle congestion, and the data is used similarly.

It also says PHAC has not been receiving the data directly, nor has any other government department. What has been shared with PHAC are rather aggregated assessments of the mobility of Canadians.

The CRC says its mandate is to analyze wireless service performance and spectrum supply and demand in Canada, and this is why it procures datasets from vendors like Tutela.

PHAC posted a request for proposal (RFP) last December to enlist the services of a contractor to obtain cellphone data directly from cell towers instead of relying on a carrier like Telus, the CRC, or commercial vendors that might not have as broad a reach. The purpose is to collect mobility data from as many devices in Canada and not just a subset tied to a specific network or those that run app-embedded software like Tutela’s.

While PHAC seeks the anonymized mobility data to inform current pandemic policies, it also wishes to expand the program to other public health issues.

The Conservative Party has pursued the matter and called for an emergency meeting of the House of Commons Ethics Committee to be held on Jan. 13 to look at PHAC’s program.

At a press conference on Jan. 10, Conservative MP John Brassard, critic for ethics and accountable government, questioned why PHAC has been analyzing the movements of Canadians “in secret,” given the program only became known after the agency posted its RFP in mid-December.

“It should not be lost on anyone that PHAC’s requests for proposal is being undertaken without any indication that this was about to occur, with no ability for parliamentary scrutiny to determine what this information has been used for,” he said.

Brassard also said the RFP was “conveniently” posted a day after Parliament adjourned for the holidays and will be closing before Parliament reconvenes on Jan. 31, “leaving no time during this period for questions to be asked by parliamentarians before it is too late.”

As MPs have started to look at the issue, the Office of the Privacy Commissioner (OPC) told Global News it is now also looking into the matter after receiving complaints.

Meanwhile, it would appear Ottawa has been leveraging what is dubbed “surveillance capitalism,” where people’s data has become a prized currency for anything from big technology firms to marketing agencies and governments.

Canada’s privacy commissioner Daniel Therrien wrote in his annual report tabled Dec. 9 that “while we have seen state surveillance modulated to some extent, the threat of surveillance capitalism has taken centre stage.”

“Personal data has emerged as a dominant and valuable asset and no one has leveraged it better than the tech giants behind our web searches and social media accounts.”