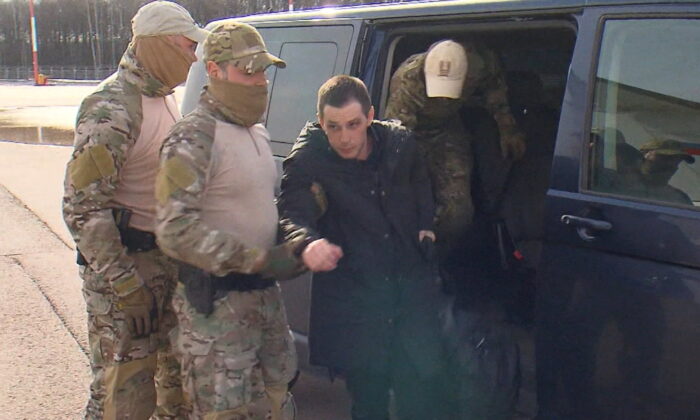 Former U.S. Marine Trevor Reed, who was detained in 2019 and accused of assaulting police officers, is escorted to a plane in Moscow, Russia, by Russian service members as part of a prisoner swap between the U.S. and Russia, in this still image taken from video released April 27, 2022. (RU24/Handout via REUTERS TV)
US News

Former marine Trevor Reed recounted his horrendous experiences in a Russian detainment center in an interview with CNN after his release in late April as part of a prisoner exchange that took place amid strained bilateral relations between the United States and Russia.

Reed, 30, from Texas, was held in a psychiatric treatment facility where he feared for his life, surrounded by filth and mentally challenged prisoners, he said in the Friday interview with CNN.

Reed was sentenced in July 2020 to nine years in prison for endangering the “life and health” of Russian police officers during an altercation in 2019. He has denied the charges and believes that he was sent to the psych unit as a punishment for his persistent push to appeal his conviction.

“The psychiatric treatment facility … I was in there with seven other prisoners in a cell. They all had severe psychological health issues—most of them. So over 50 percent of them in that cell were in there for murder, or multiple murders, sexual assault and murder—just really disturbed individuals,” Reed told CNN.

“There was blood all over the walls there where prisoners had killed themselves, or killed other prisoners, or attempted to do that,” Reed continued. “The toilet’s just a hole in the floor. And there’s crap everywhere; all over the floor, on the walls. There’s people in there also that walk around that look like zombies.”

After months of effort by the U.S. government, Reed was finally exchanged for Russian smuggler and pilot, Konstantin Yaroshenko, who was convicted for conspiring to import cocaine into the United States.

Yaroshenko was involved in transporting cocaine from South America to Liberia, where he was arrested in 2010 by American authorities. He was brought to the United States and sentenced to 20 years in prison.

The swap happened during a difficult time in the relationship between the two countries, worsened by the Russian invasion of Ukraine.

A couple of factors, including Reed’s deteriorating health condition and his family’s steadfastness in pursuing the case which led to a meeting with President Joe Biden, resulted in Reed’s freedom after nearly three years.

Reed admitted to having lost hope of ever returning to America. He said in the interview that having hope was considered as being “a weakness,” and that he didn’t want to have hope and then have it “taken from me.”

At a rally outside the White House earlier this month, Reed’s father said that his son was recovering at Fort Sam Houston in San Antonio under the care of Army experts.

The rally called on the U.S. government to bring back other Americans being held abroad, including marine Paul Whelan and WNBA star Brittany Griner who remain detained in Russia.

Whelan’s family has been requesting the U.S. government to negotiate his release.