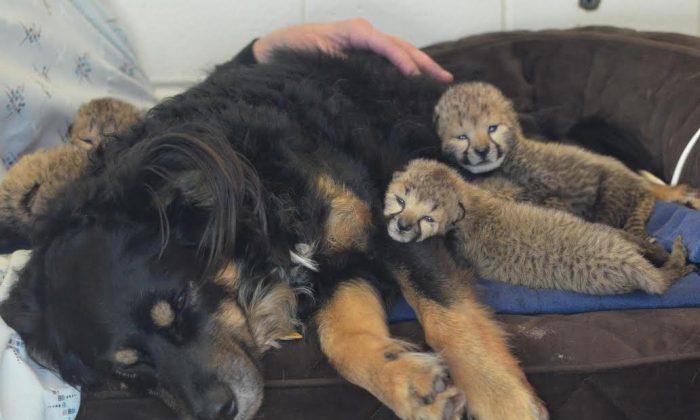 (Courtesy of Cincinnati Zoo)
US

The Cincinnati Zoo reported the death of a mother cheetah, Willow, who died March 22 after undergoing a rare Cesarean section two weeks ago.

Following the surgery, Willow, “remained lethargic and lost her appetite over the weekend,” before finally passing away.

They need the exercise to build muscle tone and get their guts moving.
— Dawn Strasser, head nursery keeper

“Without the C-section, we likely would have lost both the mom and the cubs,” the zoo said.

Not long after Willow’s death, an Australian shepherd dog, Blakely, the zoo’s resident nursery companion and caretaker to several zoo babies, has provided “non-stop snuggles” to the recently orphaned cheetah cubs—plus allowing them to climb on him, which is supposed to tone and help strengthen their muscles.

His first job is to let the cubs climb on him.
— Dawn Strasser, head nursery keeper

“His first job is to let the cubs climb on him, which they did as soon as they were put together.  They need the exercise to build muscle tone and get their guts moving,” said Head Nursery Keeper Dawn Strasser of the cubs, who are bottle fed every three hours.

Strasser supervises daily climbing sessions and other interactions with Blakely, who became a surrogate dad to these cubs.

As they grow, Blakely’s role will shift “from climbable companion and hairy warm body to teacher and role model.”

As they grow, Blakely’s role will shift from climbable companion and hairy warm body to teacher and role model.

However, this isn’t Blakely’s first time providing aid to a baby animal.

He taught his last student, Dale (a goat), to “jump up on rocks and to keep his head butts in the gentle range” and showed Savanna, a cheetah cub, the difference between a playful bite and bite that’ll start a fight.

The cubs—three males and two females—are to remain in the nursery for at least 8-12 weeks.

The Best Maternity Shoot Ever Stars A Dog

Then, they will be hand-raised and trained so they can become cheetah ambassadors.

Visitors are allowed to view the cubs through the nursery windows, but some feedings and exams will take place in private, the zoo said.