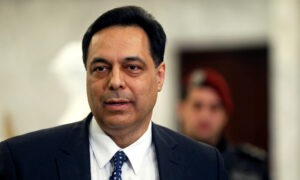 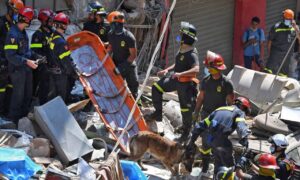 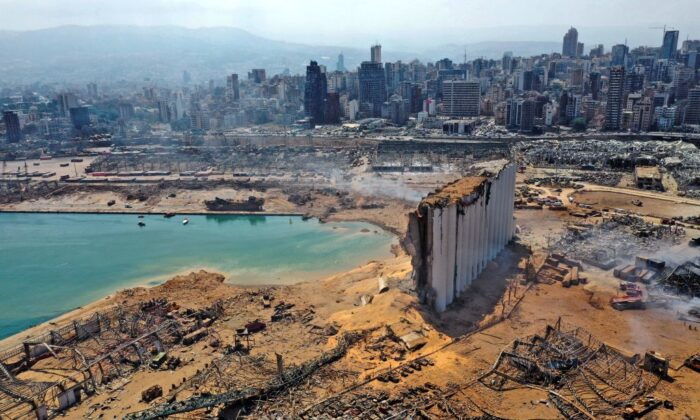 An aerial view shows the massive damage done to Beirut port and surrounding area, one day after a large blast tore through the heart of the Lebanese capital with the force of an earthquake, killing more than 100 and injuring over 4000, on Aug. 5, 2020. (-/AFP via Getty Images)
Middle East

The devastation caused by the explosion at the port in Beirut Aug. 4 aggravated the already existing economic crisis and was a catalyst for Lebanese people to demand reforms.

Lebanese people see the incident is a symptom of larger problems in the country believing “leaders have been ignoring their responsibility to meet the needs of the people, and have resisted the kind of deep fundamental reforms that are needed—transparency and accountability,” State Under Secretary for Political Affairs David Hale said at a press briefing after his visit to Beirut.

There is a need to “end to the corruption that has become endemic in this self-serving system,” he added.

Hezbollah—a Lebanese Shia militia—has been a part of “the dysfunctional governance systems” upon which “they thrive and contribute to because it allows them to act as a state within a state,” Hale said.

During the 1980s there were more than a dozen militias in Lebanon but after the Lebanese Civil War ended in 1990 all militia groups surrendered their arms to the government except Hezbollah which kept its weapons, Dr. Edy Cohen, Ph.D. at Bar-Ilan University in Israel and an expert on the Middle East at the Begin-Sadat Center for Strategic Studies told The Epoch Times in an interview.

Hezbollah’s leaders are Lebanese but the group has had very close ties to Iran for years. It carries out Iranian instructions, and receives financial support, intelligence, and materiel from Iran, Cohen said. Since the end of the Civil War, for about 30 years, Hezbollah has treated itself as a country inside a country, he added.

The State Department estimates Iran’s financial aid to Hezbollah to be $700 million per year, and “it accounts for the overwhelming majority of the group’s annual budget,” according to the State Department report on terrorism for 2019 (pdf).

“Iran continues to provide Hezbollah with most of its funding, training, weapons, and explosives, as well as a political, diplomatic, monetary, and organizational aid,” the report said.

Hezbollah also controls the Port of Beirut as well as the Lebanese airport and does not buy food, materiel, or other goods in Lebanon, Cohen said. It imports them instead. Hezbollah also trades used cars, grows, and produces drugs such as cocaine and heroin and has partnered with Latin America’s drug cartels in drug trafficking, he said (pdf).

By having control over ports it masks its economic activities and avoids paying taxes to the Lebanese authorities, which has contributed to the economic crisis, Cohen said.

How Hezbollah Influences the Lebanese Government

In the last Lebanese general election in 2018, Hezbollah won only 12 seats in the 128-member unicameral Lebanese parliament, according to Reuters. However, it holds 70 seats together with groups and individuals that are politically aligned with it.

Some parties and groups in the Hezbollah-aligned camp have different views and political goals than Hezbollah and in some cases, they conflict with it but they support its core goal which is the possession of arms, according to Reuters. Hezbollah claims that it needs arms to deter Israel and to protect Lebanon from Islamist insurgents in Syria.

As a result, Hezbollah has veto power over decisions unfavorable to it, Cohen said.

The basis of the governmental system is the power-sharing arrangement, which governs how key government posts are distributed among Lebanese religious sects.

After World War I, France established Lebanon as a largely Christian Maronite country with some other religious minorities, said Cohen.

In 1943 the French wanted to grant Lebanon independence but the Lebanese Christian community had concerns about their safety as being an enclave in the mainly Muslim population of the Middle East, Cohen said. Their fears were not unfounded as their memories of the Armenian genocide which claimed the lives of around 1.5 million of mostly Christian Armenians killed by the Turks during the Ottoman Empire about 30 years earlier were still alive.

Therefore “the French administration, in collaboration with the Christian majority, planned how Lebanon would be in the future,” Cohen said, and they drew up an unwritten power-sharing agreement stipulating that the President would only be a Maronite Christian, the Prime Minister a Sunni Muslim, and the Speaker of Parliament a Shia Muslim.

Today, there are only 800 thousand French Christians in Lebanon, Cohen said, and around 3 million Muslims (pdf), but the power-sharing rules are still in effect.

Maha Yahya, the director of the Carnegie Middle East Center based in Beirut wrote that Hezbollah “sought to transform a cosmopolitan [Lebanese] society into a collection of separate religious communities. By playing on sectarian differences and fears, they aimed to enhance their own power over their communities.”

They challenged open culture and restricted freedom of expression in the country “under the guise of protecting their sectarian brethren,” Yahya wrote for Carnegie.

“To maintain its own interests and sustain Lebanon’s role as its principal backyard, [Hezbollah] has persistently protected this [sectarian] system and managed to undermine Lebanon’s relations with both the broader Arab region and Western allies,” Yahya said.

Hezbollah was the only militia group that was allowed to keep its arms after the end of the Lebanese civil war in 1990 under the pretext of protecting Lebanon “from [the] Israeli enemy,” Cohen said.

Israel faced threats from Hezbollah along its northern border where Hezbollah placed about 150,000 rockets aimed at Israel, according to the U.S. State Department report (pdf).

“Israeli officials expressed concern that Iran was supplying Hezbollah with advanced weapons systems and technologies, as well as assisting the group in creating an infrastructure that would permit it to indigenously produce rockets, missiles, and drones to threaten Israel from Lebanon, Syria, Iraq, or Yemen,” the report said.

During all these years Hezbollah received weapons from Iran and became an increasingly dangerous threat but Israel became stronger and has even more weapons than its army could handle, Cohen explained.

The truth is that “Hezbollah is against the Lebanese, it is not against Israel,” Cohen said. The last time Hezbollah launched a mission against Israel was in 2006, he added, so its entire arsenal and militia are against Lebanon, even though Hezbollah does not admit it openly.

Once in a while, there is an incident on the border but there is no major attack, Cohen said. Hezbollah tries to cover with propaganda its real intention to launch a war against Lebanon.

Now Lebanese people have started to realize “that Hezbollah is the enemy of Lebanon,” Cohen said.

“The corruption is very high in Lebanon,” every parliament member in Lebanon can own a business unlike in America or Israel and this can create a conflict of interest, Cohen said.

There are 18 religious communities in Lebanon and they usually do business with people from their community which creates opportunities for corruption, Cohen said. There is no law to regulate these affairs. Hezbollah can kill a judge, Cohen said, it is similar to a mafia.

According to a joint study by Global Jewish Advocacy and International Institute for Counter-Terrorism, Hezbollah has avoided “direct attacks against Israel since 2006” despite that it has voiced “its intent to annihilate the Jewish state.”

Hezbollah only conducted several attacks against Israeli targets overseas during this period of time such as the terror attack on an Israeli tour bus in Bulgaria in 2012, according to the study.

Hezbollah is however heavily involved in the Syrian war fighting on the side of Bashar al-Assad’s regime and has committed numerous war crimes and human rights violations. Although the number of casualties due to Hezbollah’s involvement is not known, reports by the U.S. State Department, Human Rights Watch, and Amnesty International document the killing of civilians, human rights violations, attacks on homes, schools, and hospitals in Syria and Yemen.

The study also mentioned Hezbollah’s involvement in the assassination of former Lebanese Prime Minister Rafic Hariri, the operation of secret detention centers and jails in Lebanon, and causing bloody riots in response to Lebanese efforts “to curb Hezbollah.”

“There is no war between Hezbollah and Israel,” Cohen said. Hezbollah claims that there is a war and the two countries are enemies but it is “a false accusation.” Hezbollah’s goal is to keep its arms.

“Only international involvement” can help Lebanon to resolve the crisis and “ensure that Lebanon will rise again,” Cohen said. “No one wants to help Lebanon because of Hezbollah.”

Hezbollah has to give up their weapons and its members should live normal lives like other Lebanese, Cohen said, but it will not surrender its arms unless it is forced to.

Among the reforms that need to be implemented Hale listed “combating corruption and improving transparency, restructuring the public debt,” improving the electrical system which still doesn’t work since the civil war ended in 1990, changing “the distribution of the customs revenues which are distributed to parties rather than to the government,” and addressing the relaxed rules for accessing the port of Beirut which allow Hezbollah to use it “for any kind of nefarious activities.”

Regardless of whether Hezbollah is a part of the Lebanese government or not, it is important that the government is “truly capable of reforms,” Hale said. The big problem is that “reforms are contrary to the interests of all of the status quo leaders and that very much includes Hezbollah.”

Hezbollah leader Hassan Nasrallah’s effigy was burned about a week ago in Martyrs’ Square, Beirut, which is considered by Hale a sign that Lebanese people have started to realize that “Hezbollah is also part of the corrupt, self-serving system upon which” it thrives.