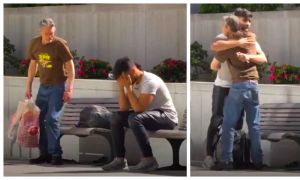 During her high school graduation party, Lauren Hernandez shows the man who has been a father figure to her for most of her life how much he means to her. She presents Joe Iosco, a man who has been like a father to her, with adoption papers. Unable to hold composure, Joe breaks down and Lauren hugs him in an emotional embrace.

“It was an amazing gift. It was something that I never thought would happen,” Joe told TODAY.

Joe Iosco, who has been in Lauren’s life since she was 1, is presented a gift from Lauren. Sally Hernandez, Lauren’s mother, has been in a relationship with Joe for most of Lauren’s life. She said he has always done the things a father should do for Lauren.

“He’s the best dad I could ever ask for,” Lauren told TODAY. “I always considered Joe as a father.”

Joe had previously tried to adopt Lauren, but her biological father would not allow it. Joe thought he would never legally be Lauren’s parent. But, after Lauren did some research, she found out that Joe could adopt her. She and her mother decided to present the papers in a meaningful way. Lauren gave Joe a framed poem and adoption papers.

“It was amazing,” Lauren told TODAY. “I have the power to make … him so happy. It is great.”