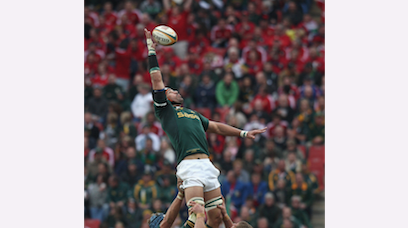 He’s back ... the great Victor Matfield returns to the Springboks. After coming out of retirement Matfield has starred in the Super Rugby and has now been reappointed to the 'Boks captiancy. He’ll be leading his team on Saturday June 7, 2014 against a World XV team. (David Rogers/Getty Images)
International

Former Australian captain, Reds half-back Will Genia is unwanted by the Wallabies, who play France in Brisbane on Saturday (June 7).

For South Africa, the brilliant Victor Matfield returns to the Springboks as captain to play a World XV in Cape Town also on Saturday.

For New Zealand, Test star Kieran Read has been overlooked due to a controversial injury ruling. The All Blacks play England in Auckland on Saturday.

Matfield returned from retirement to the Super 15 this year to help out the struggling Bulls, where he was coaching.

He beat two other strong candidates for the captaincy, Fourie du Preez and the experienced leader Bismarck du Plessis.

Meyer said he pondered “long and hard” before selecting the legendary lock Matfield as captain.

Matfield, who has played 110 Tests, had the respect of the Springboks players and was also respected “world-wide”.

Meyer praised du Plessis, who captains the Sharks, saying: “… I know he can still lead the Springboks”. Du Plessis is one of two vice-captains, with du Preez.

Talking about his selection, Matfield said: “I never dreamt of leading the team again and it’s a massive honour.”

Interestingly, Springboks prop Pat Cilliers will play against the ’Boks after being a late call-up to the World XV. Included in the world side are former Wallabies Matt Giteau, James O’Connor and Drew Mitchell, and former All Blacks Hosea Gear, Carl Hayman, Andrew Hore and Jimmy Cowan.

In Australia, Brumbies half-back Nic White replaces Genia in the Wallabies, in his third Test. His fly-half will be another young player, Bernard Foley from the Waratahs.

When naming his side, coach Ewen McKenzie said: “We function in a performance environment and so it’s important to reward those who have consistently played at a high level over the course of the season.

“The margins are so small, but it unfortunately does mean that quality players are going to miss out, which is the case for the opening Test against France.”

The All Blacks play the first of three Tests against England in Auckland on Saturday, minus former captain and star No.8 Kieran Read, who returned to play for the Crusaders last week following a long break due to concussion.

Read is the IRB player of the year and was considered an automatic selection. However, signs of concussion returned following last week’s match against the Force.

All Blacks coach Steve Hansen said it was too risky to play Read, who has played 61 Tests. “… that’s our decision, not his.”

“Long term I’m not too concerned,” Hansen said, “but we’re just not prepared to risk him this week.

“He’s frustrated, as you would be, but we’re very lucky we’ve got capable people who can fill his place.

“Jerome Kaino and Victor Vito have been performing very well and Liam Messam is an incumbent. We’ve got some good people to step up.”

Hansen could have been speaking for all three Southern Hemisphere rugby giants when he said: “Losing players is only disruptive if we allow it to be.”

The Super Rugby competition is on hold for the duration of the three-match Test window.