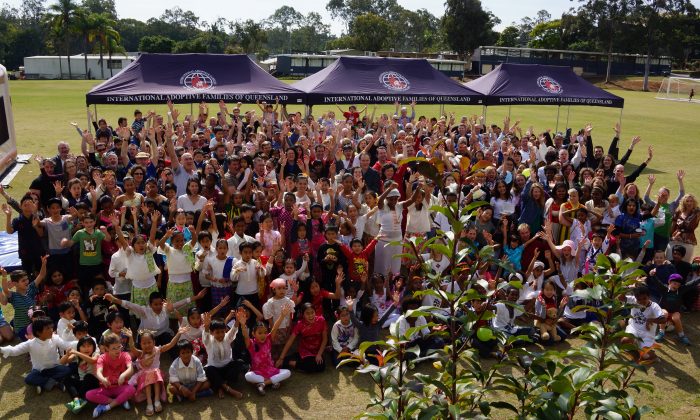 At a colourful and friendly multi-cultural gathering in Brisbane, Queensland, on the last Sunday of July, one would be wondering what the celebration was all about. Lisa Dibb, president of International Adoptive Families of Queensland (IAFQ) explains, “Today is International Adoption Day, which is a celebration of how our families were formed and each country is represented by dance and parading in their national costumes under the flag of their country, including Taiwan.”

This celebration of the 30th International Adoption Day gave adopted children and their families an opportunity to learn about different cultures and customs. Flags from 10 different countries were seen during a parade. IAFQ supports these families with such gatherings as well as camps where children can spend 4 days being together and enjoying each others’ company.

With the best interests of the child being a criteria, the new trend is to provide support and care for children in the country they now call home so that they grow up in their own cultures. UNICEF says it, “Identifies intercountry adoption as one possible component of wider child care and protection provision, to be used only when no suitable alternatives exist, or can be created in that child’s own country.”

Out of over 300 adoptions in Australia, 114 adoptions came from overseas through the intercountry process. It is a fact that “Australian adoptions are currently at their lowest levels since records began. In 2013-14 just 317 adoptions were finalised, a fraction of the number finalised at the adoption peak in the 1970s,” as reported by The Sydney Morning Herald.

Adoptive parents Rose and James Martin have two adopted children from Taiwan, and with James learning Mandarin at night school, he invited his teacher of Chinese to give lessons to his children. This grew into a larger playgroup that now enjoys Chinese language and culture lessons. Chinese festivals and food are favourite topics, Mr. Martin said, “We find it very educational for us and the children love taking part, they really love it when we do things like make dumplings, zongzi—different things like that—the children really love the food.”

Brisbane south, with a large Taiwanese population, has a Taiwan Centre, a multi-purpose centre with a teaching component that was founded nine years ago. It provides educational materials. Ms. Li, the  teacher from the centre, said, “This team is very focused on the psychological development of the child so to support these children and their families, we do a lot of activities every year.”

Finding so many Taiwanese treasures at this International Adoption Day was not surprising when checking the Australian Institute of Health and Welfare adoption statistics, which say, during the 2013/14 period, the most common countries of origin were Taiwan (41 adoptions), the Philippines (18) and South Korea (13).

The adoption processing time varies considerably between countries. In Taiwan, this period was just under a year (11 months), while in China it was just over 7 years (85 months).

With reporting by Linda Huang