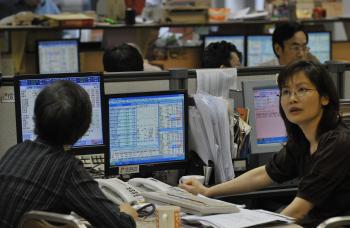 Traders at a brokerage in Hong Kong. Hong Kong ranked first among 118 nations for ease of cross-border trading and for being the most desirable trading and investment partners in international trade. (Mike Clarke/AFP/Getty Images)
Business

It was an eye opener to discover that two Asian nations ranked first among 118 nations for ease of cross-border trading and for being the most desirable trading and investment partners in international trade. Hong Kong came in first with a 6.04 score and Singapore second with a 5.71 score on a scale of 1 to 7, where 1 is the lowest possible score.

“The benefits of free trade are well known: trade opens new markets and allows countries to gain from specializing in producing those goods and services they do best,” suggested the researchers in the first “Global Enabling Trade Report 2008,” released June 18th by the World Economic Forum (WEF), based in Davos, Switzerland. WEF is an independent non-profit international organization that prides itself to bring global government and business leader together to make the world a better place to live.

The research set out to inform the market place of policy cause and effects that make a market place vibrant or lackluster. Rankings were based on four main criteria’s, openness to foreign trade; transparency in custom operations; transportation and communication networks; and lastly legal, regulatory, political, social and technological issues affecting the business environment. In each of the above, ten additional factors were considered, including tariffs, transparency and security.

Many of the issues that lowered a country's score were deliberate interference by governments to prevent competition for local traders. The most used rationalization was that the industry was in its infancy and needed protection from predator nations who could destroy the countries fragile business environment.

Nations not making the grade would be wise to read the report and improve upon the areas that make them less desirable trading partners.

“By integrating and benchmarking the full range of factors that affect trade, both at and behind the border, it [the factors in the trade report] provides meaningful guidance on what their [government officials] priorities should be,” sad Robert Z Lawrence, Professor of Trade and Investment at Harvard University, in the recent World Economic Forum press release.

The researchers leaned heavily on the experience of World Bank; United Nations; and Corporations, including the Deutsche Post AG, FedEx Corp., the United Parcel Service of America, Inc (UPS) and the World Trade Organization (WTO).

Dynamics in the Free Trade Discussions

The authors claim that the Doha Round Negotiations were quite successful in as they lowered import and export taxes and a sleuth of other tariffs that affect trade of manufactured goods across borders.

The ongoing Doha rounds (“Doha”) are a brainchild of the WTO and commenced at Doha Qatar in 2001. The Doha meetings are a venue to negotiate the lowering of trade barriers in the hope to achieve free trade among the countries.

“The WTO have seen the average import tariffs on manufactured products in industrialized countries fall from 2—30 percent to less than 4 percent and non-tariff barriers regulated,” claim the researchers.

Although the industrialized nations have addressed barriers to free trade, far too little has been done to reduce “pseudo taxes,” including transport taxes, regional, state taxes, luxury and sin taxes. Most taxes do not fall under the Doha negotiations and thus are a great stumbling block in the theory of free trade.

The researchers accused that “Additional taxes can be used to circumvent the commitments made by countries to reduce their tariffs or, for reasons of national preferences, to protect certain categories of products.”

The members of the Doha rounds are in the process of drafting an official document, addressing technical assistance by industrialized nations to countries that have not reached industrialized country status. The report will spell out clearly what reforms are needed to bring these nations up to par.

What Makes Countries Tick and What Not?

Hong Kong that operates under the two-country system has one of the most open markets in the world. The government has a very pro-business attitude, and gives free reign to economic market forces. There are no burdensome regulations and no tariffs or hidden costs on imports. The legal system is very well developed and does not favor locals over investors or buyers in a business dispute. The transportation and communication infrastructure are among the best developed in the world and customs are easy to navigate. The only blemish the researchers found is a high level of corruption.

Singapore ranked highly in three areas. Customs are easy to navigate and highly transparent and Singapore ranked 1st in this category. The transportation and communication infrastructures leave little to complain about. The business environment is open and transparent. Alas, regulations and hidden tariffs are a major obstacle in Singapore and placed 27th out of 116. Also, Singapore scorns multilateral trade rules that were negotiated under WTO trade rules and doesn't care about bilateral trade agreements either.

The U.S. scored low in cross border access, given the near paranoia concerning terrorism. Also, customs regulations are difficult to maneuver. Administratively, the U.S. customer service is perceived as being inefficient, procedures are difficult to navigate and transparency is questioned. The business world does not perceive the U.S. quite as the open country as it wants the world to believe. On the positive side, the U.S. is easy on tariffs and there are few if any barriers to trade but trade documentation and costs are seen as a burden.

China, despite its export successes, has not opened up to international trade as agreed when it became a member of the WTO.  Monetary and non-monetary barriers hinder inbound trade. Taxes can be as high, or higher, than 15 percent, making incoming goods costly in monetary and non-monetary terms. Also, corruption is very high, transparency is non-existent, regulations either do not exist or are unenforceable and the legal system protects the local business and does not hand out fair judgments.

India, hoping to be accepted as a world-class country was ranked much lower than China with whom it competes for international business. Access by foreign made goods to the Indian market is severely restricted. Import tariffs are excessively high, favoring local products. Even if non-tariff barriers have been reduced, including government regulations, high taxation is the most effective way to keep foreign goods out of Indian markets. Custom regulations are burdensome and time consuming and prevent goods from reaching the market in a timely manner. Corruption affects all areas, especially customs and is a deterrent for successful inbound trading.

Russia has a well-developed transportation and communication system, although not on par with other industrialized nations. Russia slaps on high tariffs, which makes it too costly to bring in goods outside the black market. Customs procedures are cumbersome and lacking transparency. Furthermore, physical security to trader and goods are at an all time low.