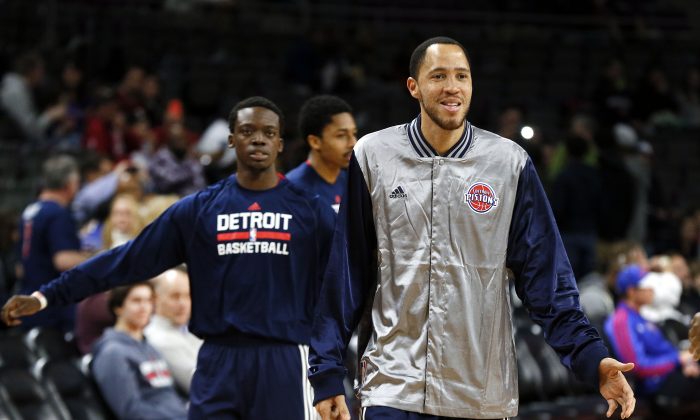 Pacers and Pistons Could Beat Out Heat, Nets for Playoff Spots in Eastern Conference

The bottom of the Eastern Conference playoff race is getting more and more interesting, particularly after the trade deadline.

The Miami Heat appeared to become a lock for one of the two bottom spots after acquiring Goran Dragic, but they were soon hit with the news that Chris Bosh is out for the year. That removed them from the lock category.

The Brooklyn Nets nearly snagged Reggie Jackson prior to the deadline, but instead only managed to get Thaddeus Young for Kevin Garnett. It was a good trade but might not be enough—because the Detroit Pistons, one of the competitors for the seventh and eighth seeds, did get Jackson; and the Indiana Pacers, finally healthy apart from Paul George, have gotten hot and are looking more and more like the team that finished first in the East last season.

Only one game separates five teams vying for the two last seeds for the Eastern Conference playoffs. The Heat are currently in seventh at 23-31, and the Nets are in eighth at 22-31. But the Pistons (23-33), Pacers (23-33), and Charlotte Hornets (22-32) are all just a half a game behind Brooklyn and a game behind Miami.

With only about 28 games left for each team, the race to earn a playoff berth in the bottom of the East is one of the more compelling storylines as the season winds down.

The reason only two seeds are up for grabs in the East is the large gap—7.5 games—between seventh seed Miami and sixth seed Milwaukee. It’s unlikely the Bucks or the Wizards, who are 1.5 games ahead of Milwaukee, freefall enough to open up another seed.

The Season So Far

Miami has struggled all season with injuries, with Dwyane Wade, Bosh, and Josh McRoberts among the players missing significant time. But with the emergence of Hassan Whiteside and most of the team getting healthy over the All-Star break, coupled with the addition of Dragic and his brother Zoran, the Heat quickly became, in many minds, a lock for the seventh seed. The Bosh injury, though, means Miami is not assured a spot and will spend the rest of the season trying to win every game they can. Even one game could mean the difference between making and missing the playoffs.

Brooklyn has struggled more with a lack of chemistry and production than injuries, although Deron Williams and Brook Lopez are among the players who have missed time. Young, who will likely start at power forward once he gets integrated with the team, was a nice pickup but adding Jackson would have been an additional boost to a team known as one of the most inconsistent in the league. In addition, the Nets have several new injuries to key rotation players Bojan Bogdanovic and Jarrett Jack.

Indiana has also been decimated with injuries but has finally started to round into form with everyone healthy except for George, their leading scorer last season, who is expected to return to action in several weeks after missing much of the season. The Pacers have won six out of seven games in February, with starting point guard George Hill back in the lineup. The team capped off its recent hot play with a gritty win over the Golden State Warriors on Sunday night.

But coach Frank Vogel emphasized that the team needs to stay hungry. “As of right now, we’re out of the playoffs,” he told reporters on Monday afternoon. “We can’t be happy with any streak. We have to stay hungry.”

Detroit started the season 5-23 before waiving Josh Smith, a shocking move that jumpstarted the team and set it off on a winning streak over some of the best teams in the NBA. Detroit then suffered the loss of starting point guard Brandon Jennings, eventually leading to the trade for Jackson, who will now start at point. If the Pistons’ 106-89 win over the Washington Wizards on Sunday is any indication, the retooled lineup is going to work well.

Charlotte also got off to a horrible start before Lance Stephenson, an offseason acquisition who has not worked out well so far, got hurt. Kemba Walker started taking over games, and the Hornets leapt up the standings into a playoff spot. But Walker got hurt, leaving the team without its leader, prompting Charlotte to acquire veteran Mo Williams. The team is trying to stay in the playoff hunt until Walker returns from injury in early March.

Strength of schedule will likely play into the race for the two last playoff seeds, with Miami having the easiest schedule in the East in terms of remaining games, according to NBA.com. The Heat play 16 of their remaining 28 games at home, and have only four back-to-backs. The Pacers have the second easiest schedule in the conference, with 15 of their remaining games at home and only five back-to-backs.

Another huge part of the remaining schedule is the head-to-heads among these five teams. There are 13 left, while some season series have been determined already. These head-to-heads are extremely important because they would act as a tiebreaker if teams ended up with the same record.

The Nets already have the upper hand on the tiebreaker with the Pistons—winning the season series 2-1. The Heat have won the series against the Nets since they’ve gone 3-0, with one game remaining. Those are the only season series that have already been determined.