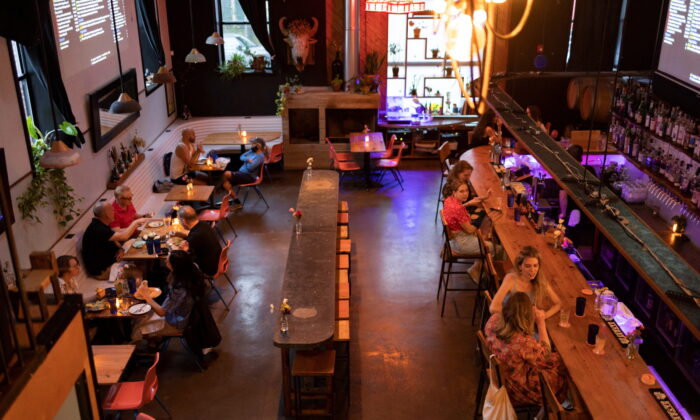 Customers drink and dine inside the restaurant "Martha" after showing proof of their COVID-19 vaccinations upon entering, in Philadelphia, on Aug. 7, 2021. (Hannah Beier/Reuters)
Inflation

Confidence among America’s small business owners dropped in March, according to the National Federation of Independent Business (NFIB), with a growing share of owners reporting that their single biggest problem was inflation.

In its monthly survey of small business sentiment, the NFIB said its Small Business Optimism Index dropped 2.4 points to 93.2 in March, the third straight month of declines in the gauge.

Inflation has replaced “labor quality” as the top problem among U.S. small business owners, with 31 percent of them reporting surging prices as their chief worry, up five percentage points from February and the highest reading in 41 years.

“Inflation has impacted small businesses throughout the country and is now their most important business problem,” he added.

Annual inflation in the United States accelerated in March to 8.5 percent, the fastest pace since 1981.

Surging energy prices, which jumped 32 percent, were behind much of the increase, prompting the White House to blame “Putin’s price hike” for the multi-decade inflationary high.

While the war in Ukraine has disrupted energy markets, a number of economists have pointed to a long run of easy money policies from the Fed combined with unprecedented levels of U.S. government spending for pushing up inflation.

The Fed has embarked on a path of monetary tightening in a bid to cool surging prices, though central bank officials are split on how persistent high inflation will be going forward.

Federal Reserve Governor Lael Brainard told the Wall Street Journal in an interview Tuesday that bringing inflation back down toward the Fed’s 2 percent target is the central bank’s “most important task” while expressing confidence that a series of rate hikes and Fed balance sheet reductions would accomplish that aim.

Richmond Fed President Thomas Barkin said in a separate interview Tuesday that bouts of high inflation could become more common going forward than they were prior to the pandemic, requiring “periods where we tighten monetary policy more than has been our recent pattern” in a bid to stabilize inflation expectations.

The New York Fed said in its most recent survey of future inflation outlooks that American consumers’ expectations for what inflation will be one year ahead have risen to 6.6 percent, the highest level in the history of the data series.

Rising inflation expectations carry the risk of an upwards wage-price spiral as belief that prices will continue to rise can lead to higher salary demands in a kind of feedback loop reminiscent of the 1970s.