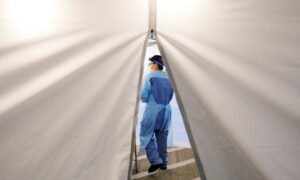 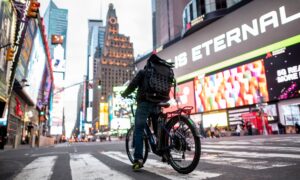 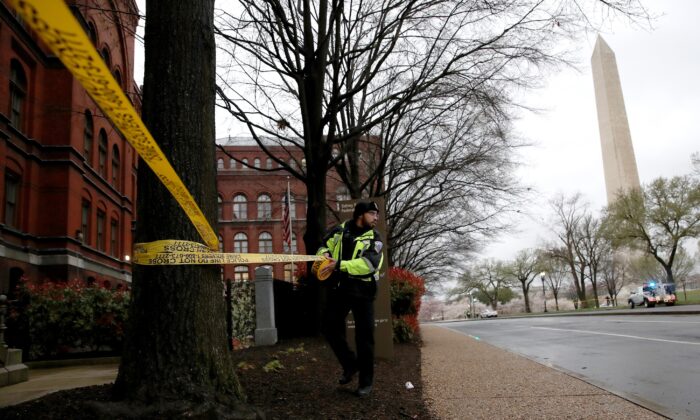 A member of the Metropolitan Police Department closes areas surrounding the Washington Monument and National Mall with police tape due to concerns of the spread of the CCP virus, in Washington on March 23, 2020. (Win McNamee/Getty Images)
AMERICA

Surgeon General on CCP Virus: ‘This Week, It’s Going to Get Bad’

Americans can expect the spread of the CCP virus in the United States to worsen this week, said Surgeon General Jerome Adams on March 23.

“I want America to understand: This week, it’s going to get bad,” he said during an appearance on NBC’s “Today” show.

“We really need to come together as a nation,” Adams said before noting how groups are visiting the cherry blossom trees in Washington and congregating at beaches in California.

“This is how the spread is occurring, and so we really, really need everyone to stay at home.”

While many Americans are abiding by social distancing measures, including avoiding crowds and maintaining at least six feet of distance between themselves and others, some people aren’t, Adams said.

The cases in New York reflect what happened two weeks ago, according to Adams.

“We don’t want Dallas, or New Orleans, or Chicago to turn into the next New York, and it means that everyone needs to be taking the right steps, right now. And that means stay at home,” he said.

The mitigation measures that authorities have implemented or advised take time to work, and some people appear to be waiting to see if things get worse, according to Adams.

Cuomo announced a number of measures in recent days to try to blunt the spread of the CCP virus, including banning all non-essential gatherings of any size for any reason, ordering the closure of all non-essential businesses, and enacting a law requiring New Yorkers aged 70 or older to stay home and limit their visitors to immediate relatives or close friends.

Any visitors should be screened for flu-like symptoms and wear a mask for the duration of the visit, as should the person being visited.

“We know the most effective way to reduce the spread of this virus is through social distancing and density reduction measures,” Cuomo told reporters.

“I have said from the start that any policy decision we make will be based on the facts, and as we get more facts, we will calibrate our response accordingly. This executive order builds on the actions we have taken to reduce the spread of the virus and protect the well-being of our friends, colleagues and neighbors.”

The number of COVID-19 cases in the United States climbed above 41,000 on March 23, according to Johns Hopkins University. But the mortality rate in the country has remained low. With 573 deaths, the rate is currently 1.37 percent.

Experts say the disease is especially harmful to the elderly, people with compromised immune systems, and those who have underlying illnesses, but can prove serious for people in other groups. The hospitalization rate for people with the virus varies from area to area but is around 15 percent in New York.

A number of people have recovered from the illness, which doesn’t currently have a vaccine or proven treatment.

Ways to avoid contracting the CCP virus include frequently washing hands, especially before eating and after visiting public places; regularly cleaning objects and surfaces such as doorknobs; and avoiding sick people.

If you start to show symptoms, which are similar to the flu and include fever and shortness of breath, you should stay home and contact health authorities or your doctor.