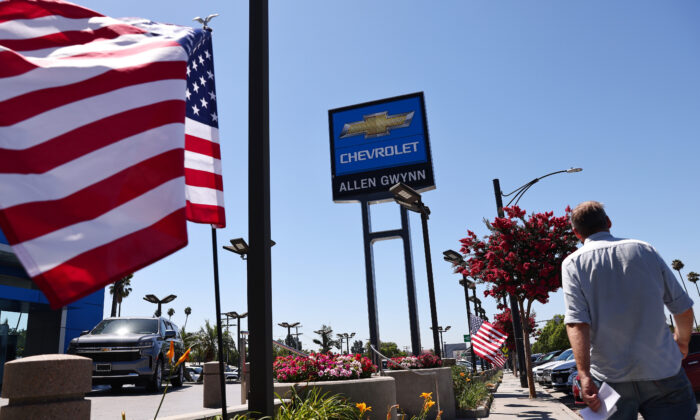 A person walks past a Chevrolet dealership in Glendale, Calif., on Aug. 4, 2021. (Mario Tama/Getty Images)
Markets

Renewed outbreaks of COVID-19 in Asia are compounding the global supply chain problems that began at the onset of the pandemic and shutdown measures last year. The latest wave of infections in Malaysia and other Southeast Asian countries has led to closures of plants and ports, causing severe disruptions in the supply of semiconductors and raw materials.

Economists and supply chain experts predict that such shortages will continue into 2022, adding to inflation pressures.

Labor scarcity and supply chain bottlenecks caused by the Delta variant are not only crippling businesses in Asia but are also having knock-on effects in many countries, including the United States.

“Thailand, Vietnam, Indonesia, Malaysia, and the Philippines together account for about 6 percent of global exports, but their dominance in electronics lends them a large impact on countries like the U.S. and China,” Vaibhav Tandon, economist at Northern Trust, wrote in a recent report.

“Malaysia has become a hub for chip testing and packing, with electronics and electrical products accounting for 39 percent of the nation’s total exports,” he wrote.

Recent chip shortages have forced General Motors to pause production for most of its North American assembly plants after Labor Day. Ford, Toyota, and Volkswagen have also announced production cuts in response to global semiconductor shortages.

The auto industry, however, isn’t the only sector feeling the pinch.

“Everything’s been hit, from washers and dryers to PlayStations and Xboxes,” says Stephen Ezell, vice president of the Information Technology and Innovation Foundation.

The chip manufacturing process is global, with different countries specializing in different stages throughout the value chain.

Southeast Asia countries, particularly Malaysia, Vietnam, and the Philippines, have specialized in the final phase of chip manufacturing—assembly, packaging, and testing—which is less skill- and capital-intensive compared to the front-end fabrication stage.

While assembly, packaging, and testing activity is concentrated primarily in Taiwan and China, new facilities being built recently in Southeast Asia have made the region into a new hub for chip manufacturing.

The devastation brought by the Delta variant in Asia is the latest but not the biggest impediment to the semiconductor industry, Ezell said.

Global chip shortages had already worsened by a series of events this year, he noted, including a fire at a chip plant in Japan, severe drought in Taiwan, and a winter storm in Texas.

“The inadequate supply of chips and solid demand will likely keep automobile and other producer prices elevated over the near term,” Scott Anderson, chief economist for Bank of the West, wrote in a recent report.

Sharp increases in car prices have contributed significantly to the high inflation this year. The consumer price index for new vehicles surged 7.6 percent annually in August, while the price index for used cars and trucks soared 31.9 percent over the same period.

Los Angeles and Long Beach, the two busiest U.S. ports, have also experienced extraordinary congestion partly due to backlogs caused by the closures of plants and ports in Asia.

China’s Meishan terminal at the Ningbo-Zhoushan Port, the world’s third-busiest container port, was closed for two weeks in August following a month-long shutdown of China’s Yantian Port in late May.

“Anytime there are delays and impacts at the ports of origin, you’re definitely going to see that domino effect here,” Mario Cordero, executive director at the Port of Long Beach, said during a press briefing in response to a question by The Epoch Times.

Southern California, he noted, is “the epicenter for imports from Asia to the United States,” and backlogs in Asia are one of the reasons the two California ports have had a record number of vessels at anchor outside the harbor.

Two weeks ago, these ports saw as high as 44 to 46 vessels at anchor, he said, compared to only nine vessels in June.

While many predict that the chip shortage problem will be resolved in 2022, some industry experts are warning that it could take years for global chip supply to return to normal levels.

The transition to electric vehicles has also exacerbated the problem.

Ford Europe Chairman Gunnar Herrmann predicts the shortage could continue through to 2024. In an interview with CNBC, Herrmann said that production of a Ford Focus requires roughly 300 chips, while an electric vehicle may require up to 3,000 chips.

“It’s not only semiconductors,” he said, adding that other commodities including lithium, plastics, and steel are also in short supply. “You find shortages or constraints all over the place.”