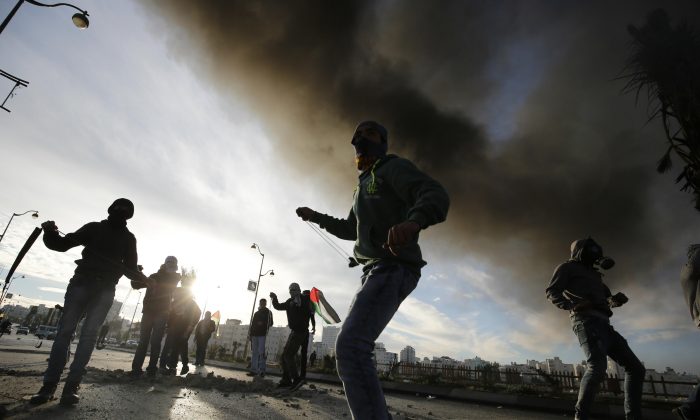 Palestinian demonstrators use sling shots to throw stones towards Israeli security forces during clashes in the Palestinian town of al-Bireh on the outskirts of Ramallah in the Israeli-occupied West Bank, on Nov. 20, 2015. Violence since the start of October has killed at least 86 people on the Palestinian side, including one Arab Israeli, 15 Israelis, an American and an Eritrean. (Abbas Momani/AFP/Getty Images)
Middle East

Surge in Israeli-Palestinian Violence Ahead of Kerry Visit

JERUSALEM—A Palestinian fatally stabbed an Israeli soldier at a West Bank gas station Monday before he was killed by security forces as two Palestinian teenage girls in Jerusalem attacked a 70-year-old Palestinian, apparently mistaking him for an Israeli, in a new rash of attacks on the eve of U.S. Secretary of State John Kerry’s visit to the region to try and calm two months of deadly violence.

The gas station stabbing took place on the 443 highway from Tel Aviv to Jerusalem, which cuts in parts through the West Bank. One of the girls, who both used scissors in a stabbing spree outside a central Jerusalem market, was shot dead while the other was wounded by armed Israelis, according to police.

In other incidents, the Israeli military said another knife-wielding Palestinian was shot dead in the West Bank before he could harm anyone. Elsewhere, a Palestinian rammed his vehicle into a pedestrian near a West Bank settlement, lightly wounding him. The civilian was evacuated to hospital while the attacker fled the scene. There have been several instances of Palestinians using their cars as weapons by crashing them into Israelis in recent months.

Monday’s attacks are the latest in a wave of violence that began in mid-September over tensions surrounding a sensitive Jerusalem holy site and quickly spread across Israel and into the West Bank and Gaza Strip.

The past week has been the deadliest of the outburst thus far. On Sunday, a 21-year-old Israeli woman was stabbed to death by a Palestinian in the West Bank, and last Thursday, five people were killed in stabbing and shooting attacks in the West Bank and Tel Aviv.

Kerry is scheduled to arrive Tuesday to meet Israeli and Palestinian leaders and try to calm tensions that show no signs of dissipating. It will mark his first visit to the area in more than a year.

In a visit to the West Bank, Prime Minister Benjamin Netanyahu pledged to keep up Israel’s tough hand against Palestinian attackers.

“We are going everywhere. We are entering into villages, communities and homes and are carrying out widespread arrests,” said Netanyahu, who appeared to be wearing a bulky flak jacket under his coat. “The most important tool that we have is the perseverance, courage and determination to fight terrorism.”

In more than two months, 19 Israelis have been killed, mostly in stabbings, while 89 Palestinians have been killed by Israeli fire. Of them, 57 are said by Israel to be attackers and the rest were killed in clashes with security forces.

Israel says the violence stems from Palestinian incitement and incendiary videos on social media. Most of the attackers have been young Palestinians in their teens and early 20s.

The Palestinians say the violence is rooted in frustration over nearly a half century of Israeli occupation and lack of hope for obtaining independence. Palestinians have also accused Israel of using excessive force, saying some attackers could be stopped without being killed.

In the gas station attack, the Israeli—18-year-old soldier Ziv Mizrahi—was stabbed in the stomach and later died of his wounds, said Eli Bin, the director of the Magen David Adom rescue service. He said the same stabber also lightly wounded two women nearby.

In Jerusalem, near the popular outdoor Mahane Yehuda market, the pair of Palestinian teenagers, aged 16 and 14, caused a panicked scene after one of them stabbed the Palestinian man.

Security camera footage from the scene shows the two girls in headscarves hopping around with objects in their hands and making stabbing motions toward bystanders before an armed police officer arrives and shoots them down.

Police spokeswoman Luba Samri said the officer ordered the girls to halt their attack, and shot them when they came toward him. Police said one of the girls was killed, while the second was wounded.

The Palestinian man, apparently mistaken for an Israeli, suffered wounds to his head and back, while a 27-year-old bystander was lightly wounded, apparently from bullet shrapnel, police said.